Ford To Put A Big Halo Around Explorer Platinum Series 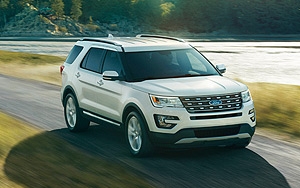 On Tuesday this week, Ford rolled into New York's Grand Central Terminal’s Vanderbilt Hall to show off the 2016 Explorer, including the trim level that will be getting a lot of attention, the Explorer Platinum Series, a new high-end version of the popular three-row SUV.

The event also put the spotlight on the sound system that will be packed inside: Sony's Clear Phase and Live Acoustics audio platforms, which are being applied to the automotive greenhouse for the first time with Explorer.

Matt Zuehlk, Explorer brand manager, tells Marketing Daily that the new 2016 Explorer Platinum Series fills a space for Ford. “Before now, the Explorer Limited was as high as we had gone on the luxury side,” he says. That, he says, wasn't high enough to compete in terms of refinement with the highest end of vehicles like Jeep Grand Cherokee Summit series and GMC Acadia Denali. What Ford has had and still has is the Explorer Sport, a higher-end trim but designed to appeal to the performance-minded  — and therefore, a vehicle that with a high-horsepower engine and performance-tuned suspension, has pulled people in from brands like Audi and Land Rover.

“But what we found was that people who ordered the Explorer Sport ordered it fully loaded, and kept saying, ‘We want more.’ And we'd talk to customers at clinics coming out of an Audi or Land Rover and they'd say they love the vehicle, but ‘I'd really like to have higher-grade leather, real wood, all the features I'm used to having in this package.’”

One might think such a consumer ought to be looking at a Lincoln, but Ford’s sister brand doesn't have a three-row SUV in the midsize footprint. There's either the five-passenger MKX, or the Navigator, “which is a lot of vehicle.”

Zuehlk says he expects a third to a half of buyers will be coming into Platinum from the Limited or Sport trim of Explorer. Ford actually started a preorder program when it unveiled the 2016 Explorer, which is not a full redesign, at the L.A. Auto Show last year. “We start shipping this summer, but we have already a significant order bank; 11,000 orders.” Zuehlk adds that the Platinum Series will be the halo for Explorer in advertising, set to launch this summer. “It will definitely be our launch vehicle. We have featured it at the auto shows, and all media communications, and then when we do tier one ads, we will also feature Platinum Series.”

Explorer has been around for a quarter of a century, and has accounted for 7 million vehicles delivered. And Explorer is one of the first SUVs, and in many peoples' minds is probably what created the category. Zuehlk says that makes the job a little easier. “When you ask people what Explorer means to them they say 'fun, family, Ford, adventure.' As a marketer, I'm done. That's what I want them to think. They have a good idea of what it is, and that's what we want to build on.”

Also returning, possibly, is something Ford started before 2000, when it marketed all of its utilities under a “No Boundaries” banner. Zuehlk says Ford might create another portfolio marketing program to talk about the range of SUVs. The company, at the L.A. Auto Show, announced it would launch a social media program with GoPro encouraging people to post their adventures around a “Seven million Explorers, and seven million adventures” theme. “It fits very well for Explorer, but we think there's a broader story to be told with the entire utility portfolio — Escape, Edge, and Explorer. We haven't done that in a long time.”