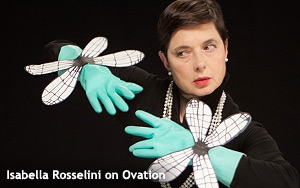 Cable channel Ovation is making its bid for upfront dollars, with eight new shows set to debut this year and a number of others in development for 2016.

The network, which bills itself as the only channel on TV devoted to arts programming, unveiled its new shows at a press breakfast Thursday in Manhattan.

The Lee brothers’ show is a kind of travelogue through the Southern U.S., where they search for regional food. “On the Record” will have Mick Rock, who has photographed and befriended numerous top rock stars since the 1970s, conversing with and also photographing various recording artists, ranging from the Flaming Lips to Patti LaBelle.

Rosselini told reporters her interest in the mating habits of animals stemmed from her education in conservation and natural history. In a brief clip from her show that was shown during the presentation, Rosselini was seen costumed in fanciful animal outfits.

Other shows coming to Ovation include “The Art Of,” a series that will visit artistic communities in various cities, “Art Breakers,” a reality series about two “art consultants” who serve as advisors to art-collector clients, and “Young Marvels,” featuring an array of child prodigies.

Eight new shows add up to an ambitious slate for a cable channel whose national coverage amounts to a relatively modest 55 million cable homes.

At the press presentation, Ovation executives talked in terms of the attractiveness of the network’s audience. “Who are our viewers? They’re men, they’re women – roughly 50-50,” said Liz Janneman, Ovation’s executive vice president of network strategy. “They’re smart, they’re educated, they have incomes, they have high net worth. They follow social media. [They are] a very highly desirable target audience for advertisers’ messages.”

She then presented research that found that Ovation viewers watch the commercials on the network, pay attention to them and, in many cases, actually buy the products advertised.

“Fifty-seven percent of the people surveyed said they would actually buy the product more than those on Bravo, more than those on BBC America, and more than those on Sundance. And I might point out that all these other networks are slightly bigger than Ovation,” Janneman said, interpreting the research data that was then being projected onto a large screen.

“The Ovation is audience is engaged in what they’re watching, with the ads -- and also, they recommend [Ovation] to friends and family,” she added.

Janneman noted that while viewership has been flat or declining on other cable channels, Ovation has had a 43% increase in viewership “year over year … a pretty incredible testament to the programming.”