Microsoft 16-Month-Old Infograph Comes Back To Haunt It 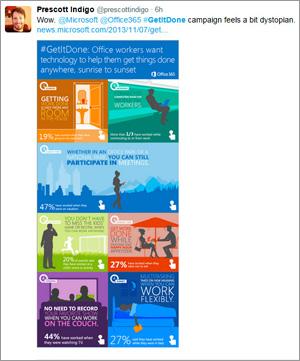 A Microsoft infographic from 2013 has come back to haunt the company, proving that content rarely dies on the Web.

Even more interesting than the message, the content not only remains online, but also provides a platform for criticism on Twitter.

The ad combines findings from a poll of employees' remote-work habits with vignettes about all the ways employees can remain productive outside of the office, 24 hours a day, seven days per week, 365 days per year.

The Harris Interactive study of 1,000 U.S. office workers conducted on behalf of Microsoft revealed that 55% of office workers said they need to be able to get work done wherever they are, and 37% said they do their best thinking outside the office.

Aside from the stats, the images in the infographic are engaging -- especially the image of the bathroom, and the man passed out face down in bed, with tablet in hand.

microsoft, research, search, social media
1 comment about "Microsoft 16-Month-Old Infograph Comes Back To Haunt It".
Check to receive email when comments are posted.
Next story loading