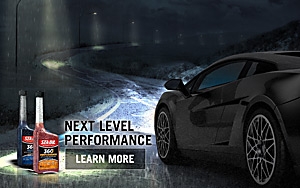 Now, Sta-Bil is continuing this animal theme with images of horses, cheetahs and marlins appearing in vapor form to demonstrate how the new Sta-Bil Performance 360° Fuel Additive "seeps into the crevices and above the fuel line to enhance engine performance."

Developed by Marc USA, this vapor animal creative serves as a visual link appearing across all media activation channels, including television networks, such as Discovery and History as well as publications, including Car & Driver, Road & Track, Popular Science and Field & Stream. In-store displays will be featured at AutoZone and other retailers.

“We wanted to bring the benefits of the vapor technology to life and used CGI to create vaporized images of animals that represent power, speed and endurance to illustrate how the vapor travels through the engine,” says Joe Burke executive creative director of Marc USA Chicago.

This campaign is designed to serve two purposes: to introduce Sta-Bil 360 Performance and reposition the Sta-Bil brand as a performance player in the market. "When it comes to Sta-Bil consumers view it as a storage additive, rather than a performance enhancer. As a result, we need to disrupt the user’s satisfaction with their current performance additive solution," the agency said.

A promotional sponsorship with the Weather Channel will feature eight different background images on the Weather.com app with Sta-Bil's “Next Level Performance” promoted at the bottom of the page. From day to night, rain and sun, Marc USA developed special imagery to complement these eight weather forecasts.

The Weather Channel was selected for several reasons, say agency executives. First, it allowed the brand to build a customized experience to reach customers across a number of channels. Also Sta-Bil is heavily weather dependent so aligning with the Weather Channel boosts awareness during key seasonal periods.

Marc USA has worked with Sta-Bil for one year and also handles parent company Gold Eagle, as well as sister brands 303 Cleaners and Heet.
ad campaign, automotive
Next story loading