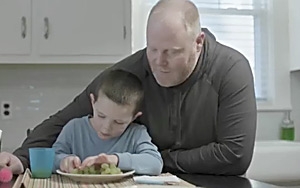 In a new advertising campaign, Citizens Bank is showing off its employees as people who have the same financial concerns as their customers. They too wonder if they’re saving enough for retirement, how they’ll pay for college or how they can manage a household budget. And that, says the campaign, makes them a trusted source for financial questions and information.

“This campaign is built on research into our customers and the needs they have around being able to ask simple [financial] questions,” Lori Dillon, Citizens’ EVP of marketing, tells Marketing Daily. “Our core customer does a lot of research on their own, but then they go to an inner circle [to consult] about their decisions.”

The campaign is intended to position Citizens and its employees as potential knowledgable members of that inner circle. A new television commercial begins with a montage of voices overlaid on shots of people getting ready for and going about their day. “Dear fellow citizens,” the voiceover begins, as one woman wakes up her son for school and another man takes out his garbage. “I know what it’s like to buy a house.” “I know how it feels to be stressed about money,” says a woman’s voice. “I know what a scary word retirement is,” says another man’s voice as he plays with his children, “and I can help.” The voiceover ends by pointing out that the people who work at Citizens aren’t just a “fellow mom, fellow dad, [or] fellow saver,” but that they’re also a “fellow citizen.”

“It’s our people that is our greatest asset,” Dillon says. “We’re not just talking about our people, we’re showcasing them.”

In addition to the television commercial, the campaign will include radio, digital and outdoor advertising in Pennsylvania, Massachusetts, Ohio and Michigan. The campaign is launching just as Citizens is beginning to take over the Charter One brand in those latter markets. As such, the campaign is also intended as a brand introduction as well.

“This campaign really highlights to personal aspect of our value proposition,” Dillon says. “It helps us build an emotional connection with our customers and prospects, which leads to a a relationship. It gives a sense of what Citizens means to people.”