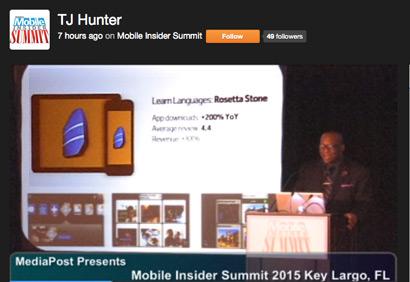 KEY LARGO, Fla. – Talk is cheap when it comes to embracing change. Brands actually have to step up and get where their users are, which undeniably is mobile, says TJ Hunter, director, digital marketing at Rosetta Stone.

"If you want to win, you cannot ignore the obvious," Hunter told the audience at MediaPost’s Mobile Insider Summit. "Early adopters and futurists win."

While it’s a no-brainer that brands want to create value in their user experience, how to do that as technology changes is the challenge.

Rosetta Stone’s goal is trying to help people learn language. The company was founded in 1992 and has sold millions of products, most of which were CDs in the iconic yellow box, to both consumers and businesses.

With increasing numbers of consumers getting their information and entertainment through their mobile devices, it didn’t take a rocket scientist for Rosetta Stone to figure out it must think outside of the box — quite literally.

"Obviously, mobile is here to stay," Hunter says. "If you have not begun to embrace the way you position your media on a mobile phone, now is the time."

Moving from the CD format to the mobile format was driven by demand, he says. Apps are where mobile users spend the majority of their time. Which leads to the $199 app.

Despite the steep price tag, Rosetta Stone’s app downloads are up 200% year-over-year, he says. That’s especially impressive when you consider that unlike a lot of mobile apps — like games — that are free, Rosetta Stone markets a premium service.

Hunter said that’s largely a function of the fact that consumers will pay to download products that are educational or increase their productivity.

He gives some advice to companies about how to optimize the mobile experience for their customers, no matter which brand is at stake.

Besides making sure all of the company's online communications are mobile friendly, "email to consumers also needs to be mobile-friendly," he adds since the majority of emails are being opened on mobile devices.

Cross-channel promotions all need to be on message and talk about the value consumers will gain by interacting with your mobile app.

Rosetta Stone acquired over 2 million fans on Facebook. The "secret sauce" for Facebook is first to identify your audience there. Next, you need to apply a segmentation schema and then build custom audiences. Personalized content is served based on interest and last touch engagement.

"That's what we did at Rosetta Stone and it was wildly successful," Hunter said.

Leveraging online video resulted in a 100% increase in mobile traffic to the brand site, he says. It also resulted in a 52% jump in YouTube channel subscribers and an 89% lift in brand traffic on YouTube Search.

While programmatic is the industry’s buzz du jour, Hunter said the key is to “humanize the data.”

“Beyond the programmatic theme,” he said, “there’s a real consumer and a real marketer.”

While the free versus pay model may be somewhat unique to his category, one thing Hunter said is universal to all brands now is that they have to have an app strategy in order to be successful.

brand marketing, conferences, mcommerce, mobile
3 comments about "How To Get Consumers To Buy $199 App".
Check to receive email when comments are posted.
Read more comments >
Next story loading