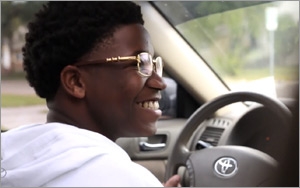 Toyota has launched a series of documentary shorts for its teen driving web site. The corporate campaign involves Getty Images Reportage photojournalists to document the American rite of passage: driving. The focus is three families in Los Angeles, Boston and St. Petersburg, Fla., part of TeenDrive365, Toyota’s teen safety initiative. The new campaign, via digital agency 360i marks the first time Getty Images Reportage has partnered with a brand to produce a series of short form multimedia documentaries.

A teenager’s new driver’s license means something different for each family. The family in Boston is worried about texting and driving, while their son is excited. The teen in St. Pete sees it as a route to freedom and achievement. His parents are proud and cautious. The Los Angeles family's daughter uses her new license to drive her mother to her grandmother’s funeral. The shorts were created by Sara Lewkowicz, Ben Lowy and Shaul Schwarz.

The overarching theme of the campaign, which launched in 2013, focuses on parents as role models for driving, with the idea that how one's parents drive has a big effect on how their kids behave behind the wheel. This year Toyota launched a distracted driving simulator on the site that uses virtual reality technology from Oculus Rift to create an augmented reality experience.

Zoe Zeigler, assistant manager of corporate marketing at Toyota, tells Marketing Daily that the campaign is Toyota’s biggest to date around safe driving. The site also includes some new video content spotlighting professional race drivers and how they are driving role models for their kids. “What we are really trying to do — for the whole initiative — is to encourage parents to be the drivers they want their kids to be. It is a unique and different way to encourage parents and teens.” She adds that over two million people have engaged with the content on the site.

The campaign includes outreach programs, such as in-person classes and a safe-driving simulator at auto shows and other events. “We are always looking for ways to spread the message even further; that's how we came up with working with Getty Images and telling authentic stories through real families. That is key,” says Zeigler. She explains that the journalists found the families and spent time with them “To learn about their driving journey and create this ‘docuseries’ to shed light on what this rite of passage means.”