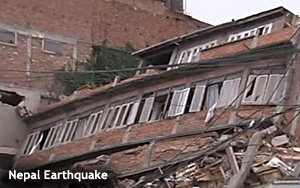 While the Internet has become a lifeline to share information about individuals in disaster areas, more must be done to create emergency standards and awareness for the tools. Google, Facebook, and Reddit have separately launched tools to help people around the affected Nepal earthquake region share information about the whereabouts or well being of friends and family.

Google launched its Person Finder tool after the devastating 7.8-magnitude Nepal earthquake that hit Saturday. A Google X executive and privacy director, Dan Fredinburg, perished in the avalanche triggered by the quake. He was one of at least 18 people known to have died while climbing Mount Everest.

Person Finder initially launched in 2010 after the Haiti earthquake. It uses a short messaging service (SMS) to allow anyone searching for an update, or providing information on someone who has been either lost or found during a natural disaster. The tool now tracks 5,700 records specific to the Nepal quake, and has been available in multiple languages for four years.

Prior to launching the search function, social media had become the link between those with information and those who need to know the well being of friends and family. It naturally evolved. The obvious issue revolves around the need for connectivity, either WiFi or cellular service, to communicate. The challenges reside in getting the message out about the tools and creating standards or a method to use them when cellular service or WiFi isn't available. Perhaps this is where Google's Project Loom or Facebook's satellite service would come in handy. On Sunday, people reported downed network coverage.

The BBC reports that at least 3,617 people are now known to have died in the earthquake. More than 200 climbers have been rescued around Mount Everest. A man evacuated by helicopter to Pokhara, 200km from Kathmandu, said nearly every home in his village of more than 1,000 houses had been destroyed.

Reddit also opened a thread to help people give and receive information about loved ones. "If anyone is in the area or knows of somebody in the area, we are looking for Spencer Dickinson, a 21 year old male from Petaluma, California," writes m2themichael, pointing to his Google Person Finder profile. "He was climbing Everest and heading to the first base-camp today. He hasn't contacted anybody and nobody can get a hold of him. Any help would be greatly appreciated."

Facebook also started a Safety Check for the Nepal area. The tool, which rolled out last year, asks users in the area affected by disaster for information about individuals. Facebook CEO Mark Zuckerberg in a post Sunday said the feature is a simple and quick way to reach out to worried family and friends.

Facebook users get a notification if they are stuck in one of the areas rocked by the earthquake. A prompt asks about their safety. The Safety Check feature also allows Facebook users to check on friends who might be stuck in the disaster area.
facebook, google, search
Next story loading