Are Social Logins Hurting Or Helping Your App?

According to Mark Zuckerberg, 80+% of the top 100 grossing apps in the U.S. use a Facebook login. That’s a staggering amount and seems to imply that social logins should be used on all apps. Today, I'm going to address the pros and cons for social logins, and let you make an informed decision for yourself.

Why are social logins so popular?

Ninety-two percent of users reported having left when they’ve forgotten their username or password according to Janrain. That’s a high number, but one that’s hardly surprising. Registration means entering the same information you’ve entered hundreds and hundreds of times, and the inevitable frustrating rejections due to typos.

Social logins help alleviate this problem, making it easy for users to sign in or register using apps they’re probably already logged into. This typically results in fewer bounces and more users in your app.

Another great benefit of social logins is the ability to gain access to large amounts of data about your audience. With such a wealth of user data on social media platforms, harvesting that data just seems like a no-brainer, as it gives companies a better understanding of demographics and a competitive edge.

What’s the downside of social logins?

While one of the biggest benefits is having additional access to user data, it’s also one of the biggest reasons against using it. Social logins require apps to disclose what information they will have access to, and many users are uneasy about sharing it. Journalist Danny Sullivan documented his reactions to Groupon’s permissions screen:

“Access my basic information: Includes name, profile picture, gender, networks, user ID, list of friends, and any other information I’ve shared with everyone.

“Some of this makes sense. Groupon can pull information it might ask me about on its own form, instead getting it from Facebook. Sure. But when you start talking about ‘list of friends’ or ‘other information,’ it feels like overkill.

“WTF! That’s my initial reaction. Groupon’s going to just start posting things to my wall? Like what things? How often? Is it going to ask me first?

“WTF again. What data is it going to access. Why’s it need to access this any time?"

Users are scared of apps having access to their personal data.

When testing to decrease failed signups, MailChimp found that social logins made only marginal increases in signups. Their A/B test showed that only 3.4% of users logged in via Twitter or Facebook. The team decided that the decrease in brand value just wasn’t worth the tiny increase in convenience.

The last problem to worry about is that social logins rely on outside parties. While it’s unlikely that large networks like Twitter or Facebook will have significant disruptions, there can still be other problems. In 2013, Facebook suddenly locked out a large number of users, requiring them to prove their identities with governmental IDs. Users were even unable to access their other apps via Facebook Login, which forced them to wait, or create new accounts.

So should you use social logins?

It depends. While there are clearly some great benefits such as decreased friction and increased social sharing, they might not be ideal for every app. Social logins can become a hinderance, causing problems such as scaring users with permissions, increasing the cognitive load, or becoming a liability. 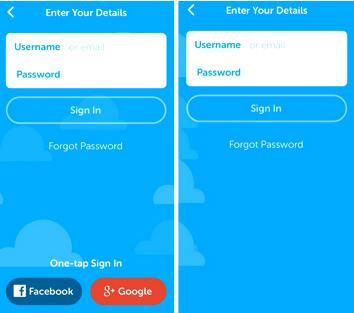 The best solution is to create a mobile A/B test with two variants (such as the one done in Duolingo above), to see which best increases engagement and conversions. Each app is different, so what works for others may not work well for you. Some of apps have even found that making logins entirely optional has increased conversions by 15%.

Whatever you choose, make sure it’s helping and not hurting you. A/B test the options to ensure that the metrics you care about don’t decrease, so you can have confidence going forward knowing you made the best choice.