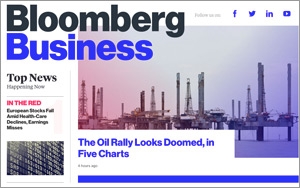 Leading editorial for the new site is senior editor Nate Lanxon, who previously worked for the UK edition of Wired, and has built a team including journalists formerly working at the BBC and Sky News.

In addition to the dedicated team for regional reporting, Bloomberg Business Europe will be able to draw on content from Bloomberg’s over 2,500 business journalists and analysts around the world.

Like the U.S. flagship, the new Bloomberg Business Europe portal will draw on content from Bloomberg News, Bloomberg Businessweek, Bloomberg Television, and original digital video, to deliver a broad range of Europe-focused content, as well as advertising products, events, and licensing deal.

According to Bloomberg Media managing director, EMEA Adam Freeman: “This will not only appeal to a more general business audience, but also enable us to work with new and existing commercial partners on the localized targeting capabilities this new edition offers.”

The new tailored ad products include a modular ad system that allows advertisers to pick from a variety of interactive and custom content presentations.

Toward that end, Bloomberg has been creating a portfolio of digital news brands around different topics, including many outside its traditional bailiwick of business information. Last May, it launched Bloomberg Politics, a multiplatform political news hub. The company is also planning to introduce a series of new media brands, including Bloomberg Markets and Bloomberg Technology, as well as a luxury media brand, Bloomberg Pursuits.