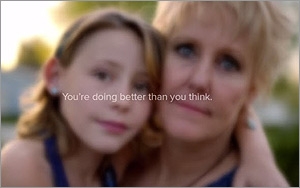 A growing number of family-friendly brands seem eager to demonstrate empathy with overwhelmed parents and help them find reassurance, via the same social media that have been contributing to parents' insecurities.

The campaigns are emerging from research-based insights confirming a social movement: Increasingly, parents are relieving the angst stemming from their fears about falling short by confessing those anxieties and rebelling against the artificial, exhausting facades perpetuated by social media.

So it's not surprising that, on the heels of Plum Organics' first national campaign, which offers parents a platform for "unfiltered" sharing (#ParentingUnfiltered), The Coca-Cola Company's Minute Maid brand is launching a similar, socially driven "Doin' Good" (#doingood) campaign.

Minute Maid's creative, developed with Doner Detroit, takes a sort of "It's a Wonderful Life" approach, dramatically showing self-doubting parents that they're actually doing a better job than they think or fear.

The focal point is a four-minute video featuring real parents discussing their painful feelings of inadequacy, followed by scenes showing their relieved, teary reactions as they read on-paper messages of love and gratitude written by their children. (Clips of the children and the parents reading parts of the messages aloud are intercut.)

The video, directed by Tool's John X. Carey, ends with the screen message "You're doing better than you think," followed by the Minute Maid logo with the brand's meshing slogan, "Put good in, get good out," underneath.

Minute Maid — "at its heart, a family brand" — understands that a stranger's comment or "someone's picture-perfect post in social media" can cause parents to ask themselves 'Am I doing good [sic] enough?," said Charles Torrey, VP, Minute Maid marketing. The brand wants to stand up for overly pressured parents, remind them "of all the good things they do that make a big difference," and "inspire them to share messages of positivity with other parents who may struggle with doubt and other negativity," confirms the campaign announcement.

In addition to using its own social media channels, Minute Maid is employing bloggers and "video seeding" partners, Facebook and YouTube to drive awareness and sharing of the video and its message.

The campaign also includes a new 30-second TV spot and digital advertising, and a redesigned MinuteMaid.com. The site now features the "Doin' Good" video, the brand's "stand" in support of parents, parents' own stories and UGC content, and links to selected third-party content that ties in with the campaign theme, in addition to product information about the brand's orange juice and other beverages.