Stan Lee Drives Audi In New Video For 'The Avengers: Age of Ultron' 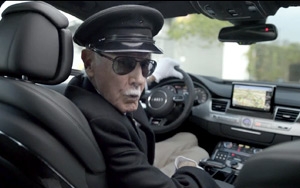 Iron Man drives an Audi R8, but Audi is playing with irony with a humorous video featuring Stan Lee teaching an acting class on how to do a cameo role in a movie, something the Marvel Entertainment executive producer and creator has done on Marvel's "Avenger" and "Thor" properties.

The online video, part of Audi's sponsorship activity around “The Avengers: Age of Ultron,” has the creator (small "c") teaching acting (small "a"). The class includes Kevin Smith (who directed the video, so might be more like Hitchcock in this case, except that he is actually acting, not doing a cameo, which is ironic), Michael Rooker and Tara Reid.

Says Loren Angelo, director of marketing at Audi of America: "We always try to put into every piece of creative what's authentic to Audi, including wit and charm that comes across with the 'challenger' mentality the brand has. Whether it's a TV commercial or something like this piece, where we accentuate a property like "The Avengers."

Angelo points out that everyone in the video actually does cameos now and then. He tells Marketing Daily that the film will live on Audi's YouTube channel, and Marvel.com will promote it as well. "And we will promote it with fan communities, as well," he says. "[Lee] has a really strong following, and his audiences enjoy these things.

The video, “Stan Lee Cameo School,” also includes a cameo -- a real one by Lou Ferrigno, who plays himself and not as an actor, but as a guy who shows up to the wrong room for an anger management class. Ferrigno was The Hulk, in “The Hulk” T.V. series, but not in the movies. So he actually has a reason to be angry. Ironically.

In the video, Lee shows up in an Audi A8 sedan to teach the class. Does he actually have an Audi or he just doing a cameo of Stan Lee driving an Audi? It’s ironic because he doesn't actually drive the car, but is chauffeured by Stan Lee making a cameo as a chauffeur. Lee has appeared in Avenger films — cameos — “Iron Man 3” and “Thor: The Dark World.”

All of which is ironic because it is a direct statement about product placement, since in the video, Lee is kind of human product placement for Audi’s relationship with The Avengers. At the end of the video Ferrigno is shown hitchhiking home, just as Bruce Banner did when the credits rolled in the T.V. show. Lee passes right by him in the Audi. Without stopping. Which is not so much ironic as metaphorical.

"With Stan Lee we wanted to do something different; we wanted to put some things in there that true fans would get," says Angelo. Audi is also running a cross-promotional TV spot for the movie incorporating footage from movie trailers, with shots that show Audi cars. Angelo says that the spot got around 4.4 million views online. In a play on Avengers tropes, that spot ends in a way that mirrors how "The Avengers" films end, when the credits role: with a sneak peak of the next film, which will be "Ant Man," wherein Audi will also have product integration.

The automaker has had a position with Marvel for a few years now. The R8, when it launched, was featured heavily in the first "Iron Man" film, a Robert Downey, Jr. vehicle (so to speak). The new film, "Avengers: Age of Ultron," which opens on Friday, features the 2016 Audi R8, 2015 TTS and 2015 A3 Cabriolet vehicles, per the automaker. And the R8 is again Tony Stark’s car. As Audi is bringing back the TT coupe, the car, the TTS version, is featured as well. Stan Lee was at the premier, too. Will he be in the movie? What if it's not a cameo, but a real role. A role with a big "A"? Now THAT would be ironic!