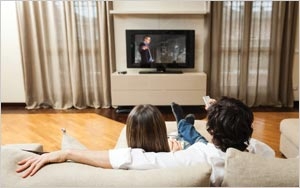 C3 ratings are the primary currency that TV marketers use to buy commercial TV inventory.

ABC and CBS had the best results during the period -- 8% and 3% higher, respectively. NBC was down 16% in the quarter, and the network had unfavorable comparisons against a year ago when it aired the Winter Olympics. Still, NBC's results were boosted this year with the airing of the Super Bowl.

Fox was down a massive 41% -- partly as a result of its overall prime-time doldrums, but also because of unfavorable comparisons to a year ago when it had the Super Bowl.

Other mid-to-smaller broadcast networks showed gains: CW improved 2%, Telemundo was 9% higher and Univision was up 1%.

Total TV C3 18-49 ratings were down 5% at the start of the TV season in September -- partially due to "Thursday Night Football” on CBS. It then went lower -- below 10% -- in December, January, and February, before improving slightly in March.

In the first quarter of 2015, all major cable network groups witnessed aggregate declines in C3 18-49 prime-time viewership -- with only five individual networks in the positive territory.

Among the cable groups, the worst results were at A&E Networks (down 21%); Viacom (off 20%); and NBCUniversal (sinking 17%). The better performers were Fox cable networks (slipping 3%); Disney (also losing 3%); Scripps Networks Interactive, AMC Networks, Time Warner (each losing 5%); and Discovery’s networks (giving back 6%).

Of the five individual cable networks that were up, three belonged to Fox, according to Todd Juenger, vice president/senior analyst of U.S. media for Sanford C. Bernstein, who co-authored the report. This included FXX, Fox Sports 1, and Fox News Channel. Other improving networks: HGTV, up 11% and CNN; 14% higher.

In the first quarter, kids cable channels overall were down 15% in C3 total day rating among the 2-11 demographic: Cartoon Network was 14% higher; Nick Jr., up 1%; Nickelodeon sunk 33%; and Disney XD was off 9%.