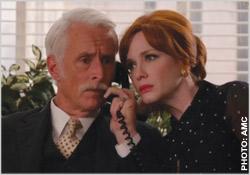 This brilliantly constructed but majorly foreboding episode, co-written by Matt Weiner and Erin Levy, is called “Time & Life,” after the prestigious building that was formerly home to Sterling Cooper. But as with any Weiner enterprise, the title has many meanings; in the existential sense, it shows that each part of T&L is fleeting.

Indeed, in this fourth-to-last-episode ever (gulp!), the hangman’s noose is swaying over every scene. Still, the story manages to be funny, poignant, surprising and a lot less stilted than the two previous episodes.

That’s partly because the script focuses on agency life, which always offers more high-flying intrigue and derring-do than the internal fugue states of downer Don. 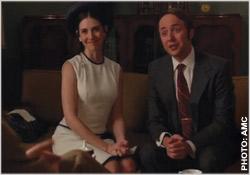 In some ways, the episode was the mirror opposite of the epic season five finale, “Shut the Door. Have a Seat,” which ended with the exhilarating creation of a new agency. This one concluded with the termination of same. But it was also a masterly call back to so many storylines and character details developed over the years.

That’s the genius of the show: that Weiner can sustain the tale, and build a thematic, coherent plot over seven seasons — and many slow patches — that also echoes the hard-to-predict pendulum motion of life itself.

Speaking of death, (and when is “Mad Men” not?) it’s a bit ironic that the episode was directed by Jared Harris. He’s the actor who played Lane, the agency’s sad British accountant/embezzler who ended up hanging himself on his office door. So there was a literal noose tied around this episode’s connective tissue.

It was about children, abandonment, bloodlines, ancient history, regrets, and grudges, best embodied in the bizarre scene at the Greenwich Country Day School that ended with Pete duking it out with the school’s director. This was another sly reference to Lane, who unexpectedly pummeled Pete in the agency office.

That the private school director denied admission to the Campbell kid not because of anything she did, but over an incident that happened more than 300 years ago, was the height of crazy. Especially in the U.S., where everyone can change names and reinvent himself. But in Pete’s case, you live by the bloodline and die by it. It turns out that Pete’s Scottish clan, the Campbells, killed the director’s own people, the McDonalds, while they were sleeping (By order of the king!) 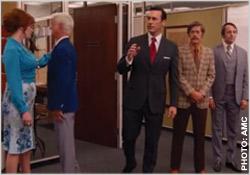 Later, this stealth action is echoed in McCann killing Sterling Cooper while they slept. Or napped. Or drank, or opened the mail. “They waited so long that I thought we were safe,” Don says. It showed the modern banality, and sheer waste, of the withering corporate kill.

So les poulets are coming home to roost, big time.

We saw this throughout the episode, but also in the brilliant little rhetorical flourishes. Lame-o Lou Avery gets to give a very harsh “Sayonara!” to Don. "Have a miserable life!” Lou says as he heads off to his new life in Japan — where, wait for it, dull, workaday Lou gets to be an independent artiste, which is every creative person’s dream.

Meanwhile, Don, takes it on the chin, and literally “surrenders” not once but twice in the episode.

Don, of course, will always be the ultimate abandoned child. At the heart of all this loss is that theme, a metaphor for what is also happening when an agency gets dumped by its parent company. And each character is dealing with his or her own abandonment, ancient or future.

Surprisingly, in the face of chaos and stunning disappointment, Hairline Pete, usually the tantruming child, suddenly becomes a human being, able to sustain tender moments with Trudy, Joan, and Peggy. I especially loved this episode because so much of the story line had to do with Peggy, who is looking radiant lately, and just last week had seen a clear path to career victory via smarts and hard work. 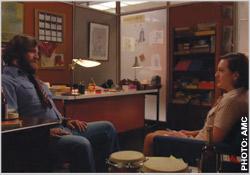 Even the little girl accidentally left in her charge could intuit that about Peggy. Rather than playing house, the girl played “office” in Peggy’s space, and was so serious about the pursuit that she ended up stapling her finger, which led to a screaming fight with the kid’s vulgar stage mom. The mother tells Peggy: "You do what you want with your children; I'll do what I want with mine," an irony that was neon-bright.

Peggy's interaction with huggie-bear Stan, when she finally acknowledges that she was a mother, and gave the child away, was one of the best-acted and written scenes in “Mad Men” history. It also reflected the scene Peggy had in Pete’s office in the second season, when she tells Pete about his son — and that she never would have wanted to keep the child or be with someone like him. The idea that Peggy broke down all of her barriers with Stan, and finally told the truth, was her Dick Whitman moment.

Don, who can usually dance around any disappointment and solve it overnight, has lost big this time. And his earliest advice to his protégé Peggy — “This never happened. You won’t believe how much this never happened” — is obviously a lie.

It felt exciting there for a moment, when Don was marshaling his forces for the birth of Sterling Cooper West. But he was outplayed by the evil overlords at McCann. And the genius visual difference between “Shut the Door” and “Time and Life” was the turnaround of the partners. The agency creation episode ends with each of the partners standing in the new Time & Life space, facing the windows — and the future. 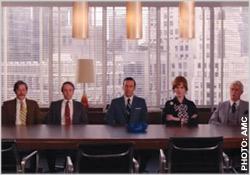 This time, after the McCann meeting, all the partners were captured sitting frontally in the conference room, facing the camera (and their captors).  It was like a 1970s recreation of “The Last Supper.”

“It’s the beginning, not the end,” Don says to the agency troops gathered to hear the best spin on the bad news that McCann delivered. Roger had just told them that McCann would ensure a “smooth transition.” Their response is to start talking and milling about. They know it’s B.S. and they don’t buy it.

The episode, which was chockful of great musical choices, ends with Dean Martin singing “Money Burns a Hole in My Pocket.” The truth is that Don really doesn’t care about money. He’s given it away again and again — to Midge, his brother, Megan, etc.

Last year ended with Bert singing “The Best Things in Life are Free.” I think Don will perhaps get out of the money business, and go to California, where he does feel free.

Still, he has his speech backwards. It’s the end, not the beginning, and time is fleeting. So is life.