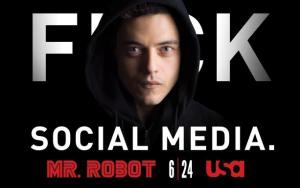 What can’t you say on television?

As far as I know, the f-word is still verboten on advertiser-supported TV, but that isn’t stopping USA Network from using the word in an edgy ad campaign for “Mr. Robot,” its upcoming drama series about a “vigilante computer hacker” (as described by USA).

The word is partially obscured in the imagery created for the campaign, but despite that, the word is obvious from the letters that are not obscured and also the context in which the word is used. You can see what I mean in the image accompanying this blog.

Here’s something interesting about these five messages: They all fit in a single Tweet, which I just learned when I saw a Tweet that encompassed all of them on Twitter this morning, posted from the account of @whoismrrobot (translation: Who is Mr. Robot?).

Well, Mr. Robot must be one angry hacker indeed if he goes around in a hoodie muttering “F--- this” and “F--- that.” I get the impression from the ads (which feature the star of the series, Rami Malek, in the hoodie) that this is the kind of guy you might want to avoid if you pass him on the sidewalk.

Certainly, USA Network doesn't want you to avoid watching “Mr. Robot,” which is the whole point of this ad campaign -- to draw attention to the show and get people talking about it in advance of its premiere on June 24.

Which brings me to the crux of the matter: Is the f-word still offensive to people or isn't it? And if it's not, isn't it just a matter of time until the word turns up in everyday speech on television (other than HBO and Showtime, of course)?

If the word is offensive, then an ad campaign such as the one being mounted for “Mr. Robot” would represent a serious lapse in judgment. But if it's not offensive, then its use here will do what USA Network intends it to do -- namely, position its new show as “edgy” (yes, I know this is the second time I've used this word today) and its title character as provocative and worth a look-see.

I never seem able to determine where we, as a society, stand on this stuff anymore. Personally, I can do without forms of advertising that use the f-word, whether or not its two middle letters are covered. I think such things coarsen our environment and our lives. But I also get the feeling that I am old-fashioned in this regard.

Take the use of formerly forbidden words on TV generally: Several words that we once considered unusable are now heard all the time. And here is where a commentator, in a column like this one, will cite the George Carlin routine from the 1970s that he titled “Seven Dirty Words You Can Never Say on Television.”

The routine has long served as a handy reference when writing about this subject. So, in the context of this column, I’m citing the Carlin routine to make the following point: At least three of the seven words he mentioned back then are now in wide use on commercial television. And I suspect more of them will come into use sooner or later.

What are the words in question? Sorry, but I’m not edgy enough to spell them out here.