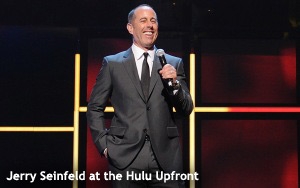 Hulu saved the best for last.

It was the announcement everyone wanted to hear at the Hulu Upfront Wednesday morning in New York, even though they already knew what it was.

The news had already broken earlier that morning: Hulu had made a deal with Sony Pictures Television to pick up all 180 episodes of “Seinfeld,” representing the first time  this series, widely considered among the finest in the history of television, would be available in its entirety for streaming. The reported price: Somewhere between $150 million to $180 million for the whole package.

If the news was leaked by Hulu itself in advance of its 9 a.m. presentation, then the gambit backfired, since the “Seinfeld” deal was all anyone was talking about on Wednesday.

Hulu execs pitched the streaming service’s attributes, announced  new shows, trotted out celebrities to promote them, and yada yada yada. But all anybody cared about was “Seinfeld.” How would the announcement be handled? And would the cast of “Seinfeld” show up?

The answers turned out to be: Hulu waited until the end of the presentation to confirm the “Seinfeld” acquisition and position the announcement as a grand finale to its upfront. As for the show’s cast, Jerry Seinfeld appeared on stage as the show’s sole representative.

Seinfeld expressed amazement that his show, which ended its first run on NBC in 1998, continues to be so popular. But he sounded just as amazed at the technology of streaming, which will make “Seinfeld” available to watch at any time.

“To be standing here today all these years later with Hulu is pretty amazing,” Seinfeld said. “This is now one of the strongest new platforms in the world. That people will only watch television like this in the future is so obvious, and that [Hulu has] figured out a way for you to watch the show whenever you want and any [episode] you want …  I just can’t believe that the show is still here. I guess [that’s] what’s so humbling and exciting.”

He also pointed out that the Hulu “Seinfeld” episodes will be presented in the full-length versions in which they first aired on NBC — rather than the versions shown for years in rerun syndication that have been continually pared and trimmed to accommodate more commercials.

Seinfeld, who turned 61 on Wednesday, also took a few questions from the audience. One questioner asked him how the making of the show would be different if it were written and produced in the present day. “What do I think it would be like if we were making ‘Seinfeld’ episodes today? Annoying,” said Seinfeld, who went on to make an intriguing point, where the social aspects of the show’s characters were concerned.

“I think all of the media and social digital capability makes the world a more annoying place,” he said. “I mean, if you don’t have to come over to talk to somebody, if you don’t have to knock on the door of the apartment to talk to somebody, I don’t even know how the hell you do it. What reason would Kramer ever have to come in? No reason. So you’d lose all those entrances! He’d just text me, you know, ‘Do you want Chinese?’”

Hulu’s other programming announcements included a nine-hour “limited event” series titled “11/22/63,” based on a Stephen King novel and starring James Franco, who appeared at the upfront with executive producer J.J. Abrams. Hulu also announced two original comedies: “Difficult People,” starring Julie Klausner and Billy Eichner and produced by Amy Poehler (all three of whom appeared on stage); and “Casual,” from producer Jason Reitman, about a dysfunctional family.