Integrated Marketing Campaigns: Who's On First?

Assigning agency teams for integrated marketing reminded us of that old Abbott and Costello routine, “Who’s on First?”. In the Mad Men days, you never had multiple bases. One agency just did it all. As the agency world broke apart, it was generally Creative on first, Media on second and, in homage to the comedy duo, I Don’t Know on third (as senior marketers tended to be hands-off in their trade and shopper marketing work).

We believed that in the age of social, mobile and user-generated content, this structure was ripe for change and review. To prove it, we commissioned a study called “Integration 40” to look at the 40 best examples of integrated creativity and process globally. We reached out to all the top marketers and their agencies in January 2015 and received hundreds of submissions.

So, “Who’s on First?” We discovered that it depends.

From Russia, adidas unleashed a brilliant campaign for Originals with its media agency in the lead. In the U.S., Beats by Dre had its digital agency lead all work, including offline advertising. In Asia, MasterCard developed a Priceless Engine, driven again by its regional digital agency.

Don Draper might be rolling in his grave — or at least his Palm Beach retirement home.

In the end, we saw six types of alignment structures and we classified each of the final 40 campaigns accordingly.

1. Multiple Best in Class Agencies. In this model, the marketer is on first. It leads integration, choosing the best possible creative, media, digital, PR and event agencies regardless of their parents. Then it has the task to put them together. This occurred in 38% of cases, in our analysis. The challenge is that it puts an onus back on the marketer. Companies such as Coca-Cola have now set up IMC teams just to “herd all the cats.” 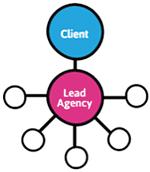 2. Lead Agency Model. Done to its full extent, as Procter & Gamble has tried over the years with its “Brand Agency Leader” model, this structure puts the pressure back on the lead agency to drive integration. We saw this model in 25% of cases, and what was more interesting was to read new examples of “Who’s On First.” When something other than a creative agency took the lead (32% of occasions), the world did not end and the campaign was still executed brilliantly. Expect to see more of this model in the future.

3. Sibling Agency Model. Here, the holding company takes the lead on behalf of the client. When the holding company was “invented,” this was no doubt the integration model in everyone’s mind. That it only occurred in 20% of the cases of the final 40 suggests it may yet to be seen as the optimal model for the future. In this structure, there’s a simplicity in the working process, but a potential lack of flexibility for the marketer when things go wrong. No one wants to throw the baby out with the bathwater.

4. Holding Company Custom Agency. Much loved by Apple. Envied by others. Tried by Dell in the past. Working well for Ford, Colgate and others, this is essentially about a holding company pooling resources into a dedicated 100% team within a holding group. In this model, there’s only one base — first. This can only work well for clients with scale but, of course, has its own challenges with attracting the best creative talent and breakthrough thinking. 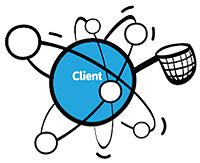 5. Free Agent. Imagine a ballpark where you have unlimited bases. In this era of crowdsourcing and social, will this be a new model whose time is to come? Look at Sony, with its nine roster agencies fighting on a project-by-project basis. What the marketer gains in total flexibility of creative resources, it surely loses in terms of strategic governance and contribution. Unilever and J. Walter Thompson just celebrated 115 years together; how would both companies be performing if it were only 115 days?

6. One Stop Shop. A relic of the Mad Men days, but still the common approach in Japan, Korea and Brazil, along with smaller marketers who simply can’t afford multiple agencies. While we saw this in 10% of relationships, we wonder if this will remain the case in five years.

Choosing the Top 40 integrated marketing approaches was a passionate and much debated task. You can read more about our criteria and process here. As you read through each of the selected campaigns, you’ll find they share very clear objectives, brave thinking, a strong and collaborative process and exceptional results.