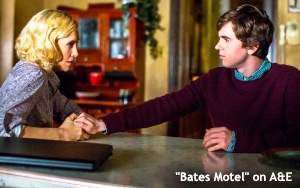 The centerpieces of A&E’s upfront presentation Thursday night in New York were the announcements of two epic miniseries that would air across multiple networks in the A&E group.

The two projects are a lavish, multi-part production of Leo Tolstoy’s “War and Peace” currently filming in St. Petersburg, Russia, and a remake of “Roots,” the most fabled miniseries in television history. They’ll both air simultaneously on A&E, History Channel and Lifetime on premiere dates that are not yet set.

The two were part of an upfront presentation that was pretty lavish in its own right. Held in the cavernous Park Avenue Armory on Manhattan’s Upper East Side, A&E’s upfront managed to cover a number of new-show announcements encompassing four of its owned networks: A&E, Lifetime, History Channel and FYI.

A fifth A&E network -- H2 (shorthand for History 2) -- was not a part of the presentation; it is reportedly due to be rebranded as the Vice network under an agreement with Vice Media that was not quite completed in time for the upfront.

But there were plenty of other announcements, in addition to the new miniseries.

In the scripted realm, History announced “Boys of ’67,” a Vietnam War drama series; Lifetime unveiled “UnREAL,” a drama about the behind-the-scenes workings of a fictional TV dating show similar to real-life reality series ,such as “The Bachelor” on ABC; and A&E announced “Damien,” a drama series whose title character is the adult Damien Thorn, formerly the child spawn of Satan featured in the “Omen” movies, beginning in 1976.

“I do want to point out that we now have both Norman Bates and Damien Thorn on our brand, so you kind of have to buy us now!” said Rob Sharenow, executive vice president and general manager of A&E and Lifetime, to his audience of ad agency reps. He was referring to A&E’s existing horror hit “Bates Motel.”

New unscripted shows announced Thursday included “Sing It,” an a cappella competition coming to Lifetime; “Alone,” a series on History Channel that will feature survivalists deposited hundreds of miles from civilization with little more than a video camera, from which this entire series will be produced; and “Fit 2 Fat 2 Fit” on A&E, a show that will have personal trainers purposely gaining substantial amounts of weight on junk food diets and then shedding the weight and getting in shape alongside their overweight clients.

In her remarks at the beginning of the presentation, A&E Networks President and CEO Nancy Dubuc emphasized the company’s focus on original productions. She reported that the company’s in-house production arm -- A&E Studios -- currently has more than “40 projects in various states of production.”

“We’re a company of great creators -- digital creators, scripted creators, reality creators, branded entertainment creators and business creators,” Dubuc said, making her pitch. “We offer consistency and credibility for your clients in a time where there’s scarcity in both. … Tonight you’ll hear about the many new ways that we will partner with you, so that your brands become an integrated part of our creative.”

At a reception following the presentation, attendees mingled with an array of personalities and stars representing the wide variety of A&E shows – from the casts of “Vikings” (History Channel), “Devious Maids” (Lifetime) and “Bates Motel” to the stars of reality shows such as “Pawn Stars” and “American Pickers” (both on History Channel).

Among those in attendance was LeVar Burton, star of the original “Roots” miniseries, and now an executive producer of the remake.