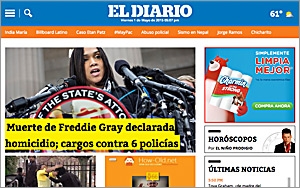 With the U.S. Hispanic population growing by leaps and bounds, advertisers are ramping up Hispanic ad spend to keep pace, to the benefit of both Hispanic and general interest publications, across both Spanish and English-language publications.

Spending on advertising targeting U.S. Hispanics will top $7.1 billion in 2015, up 63% from $4.3 billion in 2010, according to the Association of Hispanic Advertising Agencies, based on data from Nielsen Monitor Plus.

The top 500 advertisers tracked by the AHAA boosted their average spending from $9 million in 2010 to $14 million this year. Some of the top advertisers that are raising their spending on advertising to U.S. Hispanics include Nissan, Toyota, Walmart, Target, Lowes, Verizon, AT&T, Ruby Tuesday and Wellpoint.

The presence of English-language advertising targeting Hispanics reflects the growing numbers of U.S. Hispanic millennials who are bilingual, more acculturated than earlier generations, and prefer to consume some or all of their media content in English.

According to the U.S. Census, there are now around 55 million Hispanics living in the U.S., including immigrants and native-born individuals, and is on course to reach 106 million by 2050. Separately Nielsen forecast that total U.S. Hispanic power would top $1.5 trillion this year.