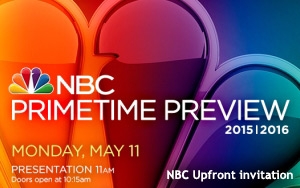 If TV is no longer compartmentalized into “seasons,” then the concept of “upfront” ad sales would seem to have lost its meaning.

Or maybe not. Perhaps it’s still possible to commit money in advance to TV shows (whether actually on TV, or online) without exactly knowing when or how (or even if) they will air.

When the upfront presentations finally conclude on Thursday of next week (May 14), they will have been going on for 13 weeks, starting with Nickelodeon way back in the dead of winter (on Feb. 25). They have taken many forms, ranging from big multimedia presentations staged in cavernous auditoriums before audiences of hundreds to much-smaller presentations staged in intimate hotel party spaces or restaurants for small groups -- sometimes only journalists and sometimes not.

Discovery Networks, for example, opted not to stage its customary multi-network extravaganza at the Jazz At Lincoln Center auditorium on Columbus Circle. Instead, the company showed its presentation to journalists at a buffet breakfast. The company then took its presentation on the road to show it privately to ad execs in major cities.

Last week, the presentation schedule was heavy with events put on by so-called new-media companies -- Yahoo, Google/YouTube, BuzzFeed, Hulu, Conde Nast Entertainment, AOL and others. With the exception of Hulu, this group calls their presentations “NewFronts.” A couple of TV companies held upfront presentations -- most notably A&E Networks, which owns A&E, History Channel and the various Lifetime channels.

This week, there is a lull of sorts, at least where presentations by big, marquee-name companies are concerned. This week, the schedule lists events from the likes of TheStreet.com, Endemol Beyond and DailyMail.com.

They’re the kinds of companies traditionalists don’t expect to hear from during upfront (or “NewFront”) season, but there they are. Even NPR -- yes, National Public Radio -- had an upfront event last week. It was held in a Greenwich Village restaurant to promote its podcasts.

This “NewFront” term has been evidently coined to differentiate these online content companies from traditional television, although when you get right down to it, they all sell a somewhat similar package -- or at the very least, they all sound similar.

At presentations large and small, new “content” opportunities -- be they regular TV shows (like Yahoo and A&E) or short-form features (such as the ones seen on BuzzFeed) -- are offered across multiple platforms, providing interested advertisers with access to potential customers across multiple devices, multiple screens, or whatever a company wishes to call them.

In this regard, the online companies and the TV companies are in the same business, since they’re all multiplatform media companies now. For example, A&E stressed tentpole “event” productions such as its upcoming miniseries “War and Peace” and “Roots” (a remake of the original blockbuster). But it also announced a handful of digital-only series.

Yahoo announced shows right out of the traditional TV playbook: A talent competition show from Simon Cowell (this one focuses on techno-music DJs) and a sitcom positioned blatantly as a copy of “Friends.”

Next week, the “traditional” upfront week finally arrives -- the annual showcase for the four-and-a-half broadcast networks (CBS, ABC, NBC, Fox and CW) to announce their fall lineups. This is what the term “upfront” was coined for originally -- the idea of selling a season’s worth of programming on broadcast TV a few months before the shows begin -- “upfront,” as it were.

Of course, upfront week does not belong exclusively to the broadcast networks anymore. A number of cable channels and Spanish-language networks are also due to hold upfront presentations next week -- all of the Turner networks, for example, plus the NBC cable networks, along with ESPN, ESPN Deportes, Univision, Telemundo and Azteca America.

All of these companies will talk in terms of multiplatform opportunities too, but here’s where the traditional networks would seem to diverge from everyone else. The broadcast networks can claim to know exactly when the shows they announce will premiere, and the day and hour in which they will air.

And while this attribute probably strikes some – particularly those in the newer media -- as rigid and inflexible (i.e., old-fashioned), it is, in fact, a strength of network television, particularly where decisions on the allocation of millions of dollars is concerned.