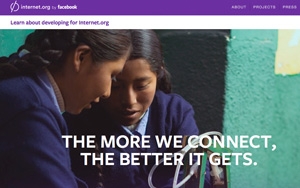 Facebook has launched the Internet.org Project in a bid to build out a dedicated network of application developers. The Facebook-led initiative will create an open program and services that integrate with the site. The company has tied the project to net neutrality in an effort to give people access to free, basic Internet services.

With help from developers, the site will go from being stagnant pages to a portal that offers a range of free, basic services. While Google, Microsoft and Yahoo are notably missing from this project, some of the participants focusing on mobile and the Internet's backbone include Ericsson, Mediatek, Opera Software, Nokia, and Qualcomm.

The announcement does suggest that Facebook wants the project to work with as many developers and entrepreneurs as possible, extending the benefits of connectivity to diverse, local communities. To do this, Facebook pledges to offer free, basic services through Internet.org in a way that is more transparent and inclusive.

The company will ask developers to build out services.

This all sounds ambitious, but Facebook founder Mark Zuckerberg's vision suggests that having access to the Internet changes people's economic status. "Nearly two-thirds of the world's population doesn't have Internet access," he said. "Research has shown that for every billion people gaining accesses to the Internet, more than 100 million are lifted out of poverty."

The goal is to allow more people to experience the benefits of being online, but developers must build apps that use data more effectively. Net neutrality and connecting everyone in the world must coexist, per Zuckerberg, two principals The Internet.org Project will support.

While it costs tens of billions of dollars to operate the Internet, the organization will open the Internet.org Project to anyone so they can build free basic services. Zuckerberg said the company is building an open platform, so anyone meeting specific guidelines can participate. The company will share open technical specs that any compatible service can use.