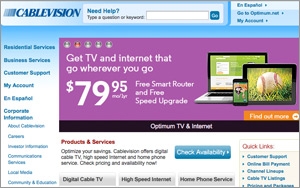 Although video subscribers continue to decline -- as they generally have for other pay TV operators -- Cablevision’s efforts to target “cord-cutters” with new lower-cost video packages are adding rather than replacing other services.

Talking to analysts on Monday, James Dolan, CEO of Cablevision, said: “We see the cord-cutters package as a way of filling out that product line and being able to offer levels of service that are less expensive than the big bundle.”

During the first quarter, Cablevision's local advertising revenues lost some steam -- totaling $31 million --- down from $48 million in fourth-quarter 2014, and less than the $32 million in the first-quarter 2014 period.

Cablevision says two key advertising categories are to blame for the 3% decline versus the same time period a year ago: lower gaming and bank ad spending. At the same time, there was higher automotive and consumer product advertising.