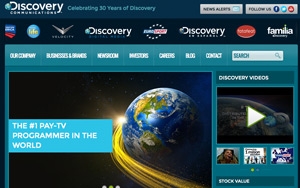 Although Discovery Communications’ U.S. networks were down in key prime-time viewers in its first-quarter financial reporting period, domestic advertising edged up 1%.

Domestic advertising added 1% to get to $375 million, against an estimated 6% decline in prime-time 18-49 viewers in Nielsen C3 measurement, according to Juenger. He notes that overall viewers for all Discovery networks gained 2% in the period during prime time -- with the big Discovery Channel growing 10%.

The bad news? “Organic international distribution growing only 6% (down from 8% in previous quarter), which is troubling because it calls into question the sustainability of emerging market subscriber growth,” he writes.

Revenue from international networks was up 10% to $735 million -- 17% more from affiliate fees to $396 million but down 1% to $312 million from advertising sales. The company says advertising revenues, excluding Eurosport, were up 12% in local currency terms.

Overall, Discovery Communications had 9% improved revenues to $1.54 billion with net income was 9% higher to $250 million.