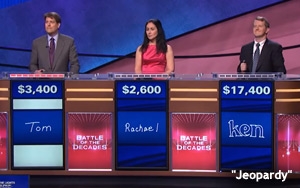 Seven months into the syndication TV season, there are a number of gains among daily first-run TV shows -- in particular, game and talk programs.

CBS Television Distribution’s “Wheel of Fortune” is up slightly -- 20,000 total average viewers -- to a Nielsen live program-plus-same day of 11.18 million average viewers through April 26th of this year over the same seven-month period a year before. Longtime leader “Wheel” is tops among all daily syndicated TV series.

Sister game show “Jeopardy,” also distributed from CBS, is up 3% to 10.38 million viewers. Right behind these two is one of the biggest syndication movers so far to date: Twentieth Television’s “Family Feud” is 20% higher to 9.198 million viewers.

Warner Bros.’ “Big Bang Theory” still leads all off-network sitcoms at 9.27 million viewers, down 4% from a year ago. Newer off-network show Twentieth’s “How I Met Your Mother” has gained 9% to 3.2 million.

CBS’ “Judge Judy” still has a dominant lead over all Monday through Friday court shows -- 9.66 million viewers, down 4% from a year ago. Newer show “Lauren Lake’s Paternity Court” is up 21% to 1.7 million viewers.

CBS’ “Entertainment Tonight” is still the champ of all entertainment magazine shows -- with 4.92 million viewers, down 8% from a year ago. “ET” is getting more competition from its sister magazine show distributed by CBS, “Inside Edition,” which improved 3% to 4.45 million.