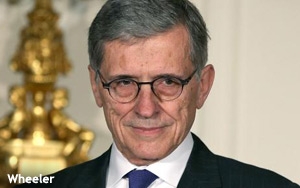 Federal Communications Commission Chairman Tom Wheeler said on Wednesday that he is in favor of giving online video distributors some of the same rights as cable and satellite providers.

Speaking at the National Cable & Telecommunications Association's Internet & Television Expo in Chicago, Wheeler said the FCC has “work to do” to clear obstacles to competition. Among other moves, he said the agency will consider whether to redefine the term "multichannel video program distributor."

“To be candid, I favor a technology-neutral definition that includes Internet-based companies that choose business models that fit this status,” Wheeler said in his prepared remarks.

Cable and satellite providers, but not online video distributors, currently are considered multichannel video program distributors. The FCC is considering whether to broaden the definition so that it covers all companies that distribute multiple streams of “linear” programming -- meaning shows that run at specified times.

The potential rule-change is not intended to affect companies like Netflix, which only offer programs on demand. Instead, it's aimed at companies like the former Aereo, which streamed programs contemporaneously with over-the-air broadcasts.

(Online distributors like FilmOn or the former Aereo also would have to convince the Copyright Office they are entitled to a statutory copyright license. The Copyright Office said last year that it was inclined to reject applications from Aereo and FilmOn, but indicated that decision could change in the future.)

The National Cable & Telecommunications Association opposes changing the definition of multichannel video programming distributor, arguing that the move wouldn't further competition. “Requiring cable-affiliated networks to deal with [online video distributors] on terms that they would not otherwise choose would only serve to distort competition in the video marketplace,” the organization wrote in comments filed last month.

Wheeler also defended the FCC's recent net neutrality order -- which the NCTA and other trade groups are appealing.

In February, the agency voted to reclassify broadband access as utility service and impose some common-carrier obligations on providers. The new rules prohibit providers from blocking or degrading traffic and from charging companies higher fees for faster delivery of their material. The order also contains a general conduct standard that broadly prohibits carriers from impairing online openness.

The NCTA and others have criticized the general conduct standard as too vague.

But Wheeler indicated today that the language is aimed at preventing broadband carriers from taking advantage of loopholes in the neutrality rules.

“The purpose of the Open Internet order is not to create an obstacle course to test the ingenuity of ISPs in how they may structure certain activities,” he said. “History proves that absent competition a predominant position in the market such as yours creates economic incentives to use that market power to protect your traditional business in a way that is ultimately harmful to consumers.”