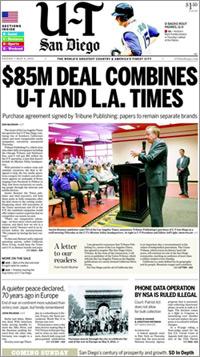 The upheaval in Southern California’s newspaper business continues. Tribune Publishing, owner of the Los Angeles Times, is buying The San Diego Union-Tribune from its previous owner, real-estate developer Doug Manchester, for $85 million. The deal will give Tribune control of the two largest newspapers in Southern California, at a time when other major publishers are in retreat.

The acquisition, first reported by the U-T, will leave the newspapers as separate brands with separate newsrooms, but combine their management under a new operating entity, California News Group, allowing them to share some editorial content as well as resources in areas like printing and distribution services. It will also enable them to offer print and digital advertisers combined reach and greater scale.

Under the terms of the acquisition, LAT publisher and chief executive Austin Beutner will assume the same roles at U-T. The acquisition does not include the U-T’s offices in Mission Valley, which will continue to be owned by Manchester, who is hoping to develop the property with luxury apartments.

While some critics bemoaned the shift in ownership to a corporate publisher based outside San Diego, the previous regime was also controversial, as Manchester openly vowed to use the newspaper to support local political causes. Among other things, in 2012 he let it be known the newspaper would be a “cheerleader” for a new downtown stadium.

Around that time, the paper’s CEO John T. Lynch told The New York Times: “We are doing what a newspaper ought to do, which is to take positions. We are very consistent -- pro-conservative, pro-business, pro-military -- and we are trying to make a newspaper that gets people excited about this city and its future.”

Some other Southern California newspaper publishers are in disarray. In March, Freedom Communications, the owner of the Orange County Register, announced that bosses Aaron Kushner and Eric Spitz were resigning their executive positions after their ambitious attempts to remake the newspaper business failed.