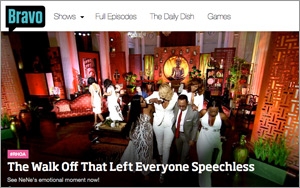 NBCUniversal says advertisers witnessed major returns on their media investments in consumer product spending on some of of its cable networks.

On NBCUniversal “lifestyle” networks — Bravo, E!, and Oxygen — for every one dollar spent in media by marketers on these channels, retailers saw $15 return on their advertising spending. This data comes from Nielsen Buyer Insights.

NBC said its trio of lifestyle cable networks outperformed other competing cable network groups by as much as 90%.

Laura Molen, EVP of Lifestyle Advertising Sales at NBCUniversal, stated that these networks’ audiences are not only affluent and spend more, but are “highly influenced by advertising.”

Many TV networks have been looking to amp up their advertising positioning by linking TV viewing data with consumer purchasing data for the upcoming upfront advertising market.

Recently, CBS said when it comes to watching their TV networks shows, consumer buying behavior was rated No. 1 among a broad array of advertising categories -- including all automotive categories, moviegoers, financial, restaurant, retail, and travel.