Facebook is now the fastest-growing major media supplier to Madison Avenue, but Google remains No. 1, according to the 2015 edition of the “Top Thirty Global Media Owners” report from Publicis’ ZenithOptimedia unit.

While Facebook is sprinting fast, Google is now 136% bigger than the world’s second-largest media owner, Disney, up from 115% a year earlier. It is also bigger than Disney and the third-largest, Comcast, combined.

The rankings, which are based on ZenithOptimedia’s analysis of estimated advertising-derived media revenues, were launched in 2007, and was last published in 2014.

“Google has benefited from the rising sales of smartphones and tablets, making its central search function available to consumers on the move -- especially useful for shoppers looking for price comparison -- and allowed consumers to view content at times and places most convenient for them,” the report explains of Google’s growing dominance, adding: “This has created new opportunities to target them with display ads, another important component of Google’s business. But the main beneficiary of the transition to mobile has been Facebook, which is the fastest growing of our top 30 media owners. Facebook’s media revenues grew 63% over the past year.”

The report notes that mobile is also driving most of the other Top Thirties, especially Facebook, which now ranks No. 10 overall. 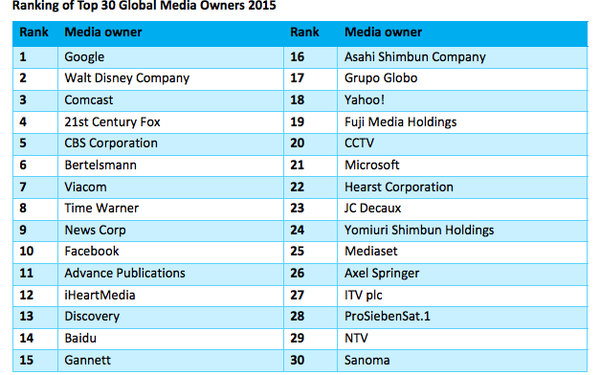