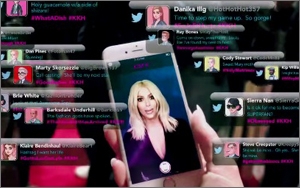 With more than 33 million downloads in less than a year, Glu Mobile’s game “Kim Kardashian: Hollywood” has been an unmitigated — if somewhat surprising — success. But there’s no reason it can’t be even more successful.

The company this week is launching its first-ever television campaign to promote the game, in which players attempt to move up Hollywood’s social ladder. The campaign’s aim is twofold — to lure new players to the game, as well as get lapsed players to return, says Chris Akhavan, Glu’s president of publishing.

“We think there’s a much larger audience to be reached,” Akhavan tells Marketing Daily. “A lot of the players who are playing the game are not traditional gamers, so we can’t rely on mobile ad networks to reach them.”

The commercial features a first-person point of view, with a model trying on dresses to Kardashian’s commentary via smartphone. The character then heads out into the street and is faced with several in-game choices, acted out in real life, like flirting with a cute hunk or heading to a big Hollywood premiere. The character opts for the premiere where commentary shows she’s “blowing up,” (according to Kardashian).

The spot will run on networks such as E!, MTV, Vh1, Bravo and FX, which were chosen because they have audiences that are at least familiar with Kardashian and the game’s existence, Akhavan says. The commercial is the first such effort for any of Glu’s titles, which also include "Diner Dash," "Deer Hunter" and "Frontline Commando."

“We haven’t had a title in the past that has merited a TV campaign,” Akhavan says, adding that many competitors are also taking to the big box to advertise their games. “We do expect this to be an ongoing channel for Glu going forward.”

In addition to the television commercial, Glu last week launched an online marketing contest, in which six YouTube personalities (five women and one man) compete against each other in the game for a week to see who can reach the highest social status. Throughout the contest, the personalities (Strawburry17, LDShadowLady, Farahdhukai, Jess icaHarlow, SuperMaryFace, Jouelzy) will post videos and engage their audiences, which combined account for more than 46 million Twitter and YouTube followers (with some overlap), to help them compete in the came with tips and tricks. The winner will be featured as a character to meet in additional content for the game.

“We can no longer ignore [the YouTube stars] have tremendous influence,” Akhavan says. “We’re following our audience where they are.”

Like the television effort, the online contest is meant to attract lapsed and new players, who may have heard of the game, but for some reason either never downloaded it. Since the contest launched last Friday, the game has moved back into the top 20 among iOS games, Akhavan says.

“As successful as this title has been, we still feel we’re very early in the cycle of its life,” he says.