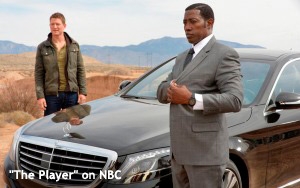 NBC’s programming strategy for next season seems to be a combination of top stars, live events and dramas that seem to grow more complex every year.

That was the impression gleaned from NBC’s upfront presentation at Radio City Music Hall Monday morning. Here’s our analysis of NBC’s programming plans.

Star Power: The most surprising of all the casting announcements was the news that Jennifer Lopez would be starring in a gritty NBC cop show called “Shades of Blue,” co-starring Ray Liotta and Drea de Matteo. “Between Good Cop and Bad Cop, there are … ‘Shades of Blue’!” went the tagline for this series,  earmarked as a midseason show premiering in 2016. If it comes to pass, JLo will achieve the rare feat of appearing on two networks at the same time -- on NBC and the final season of “American Idol” on Fox next winter and spring.

Just as surprising as JLo was the news that Wesley Snipes would star in one of NBC’s new fall dramas, “The Player,” slated for Thursday nights. The show represents his highest-profile job since serving three years in prison on a tax-evasion conviction. (He was released in 2013). Then there was the announcement of NBC’s new alliance with Dolly Parton who came onstage, sang two songs and stole the whole show.

Parton is producing a series of family TV movies for NBC that will each be based on one of her songs. “We’re looking forward to many projects [with NBC], so get that money out!” Dolly said cheerfully to the audience of ad agency representatives and media executives.

Live, Live, Live: In presenting NBC’s programming plans for next season, NBC Entertainment Chairman Bob Greenblatt emphasized live shows, including a live telecast of “The Wiz,” NBC’s annual live musical. The biggest surprise was the announcement that one of NBC’s returning sitcoms, “Undateable,” scheduled to lead-off Friday nights at 8 p.m. ET – would air live every single week. Greenblatt indicated that this decision was made only recently, following a live episode of “Undateable” that aired a few weeks ago. You’d probably have to go back to the 1950s to find the last network comedy series that aired live every week.

The other weekly, live show on NBC’s schedule is the highly anticipated variety show hosted by Neil Patrick Harris. Titled “Best Time Ever,” it’s slated to run through November on Tuesday nights at 10 ET. Harris himself came onstage to explain the show, which seems to be a combination of novelty acts, elaborate pranks and daredevil stunts. “It’s a high-energy grab-bag of comedy, games, prizes, music, surprises -- the kind of show where anything can happen to anybody,” Harris said. He also suggested that ads seen during the show would contain interactive components, although he did not elaborate. “[Viewers] won’t just watch the ads, they’ll win the ads,” Harris said.

It's Complicated: NBC’s new dramas include “Blindspot,” a show about a woman who emerges from a duffel bag in the middle of Times Square stark naked. She's tattooed head to toe with words and images she doesn’t understand because her mind and memory have been erased. “Blindspot” will premiere Monday nights at 10 ET following “The Voice” -- the most “coveted” slot on the NBC lineup by virtue of the lead-in audience delivered by “The Voice.”

NBC’s other fantastical dramas include “Heroes Reborn,” the reboot of “Heroes,” in which ordinary people have all sorts of comic-book-style super powers and the aforementioned “The Player,” in which a secretive trio of Las Vegas-based crime fighters (headed by Snipes) places bets on crimes and then seems to prevent or foil them. Finally, “Heartbreaker” (Tuesday nights at 10), starring Melissa George as the world’s greatest heart surgeon. She has no super-powers or abilities, but in the clip shown at the upfront, this character was so zealous in her dedication to the practice of medicine that the clip played like a fantasy.