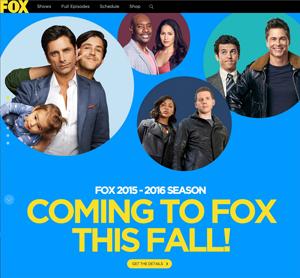 In the midst of taking a major ratings hit this current season — and the expectation of a difficult upfront advertising market to come — Fox has announced a major revamp of its prime-time schedule: Five new prime-time shows will debut this fall.

Fox has seen a big 20% decline in the key 18-49 demographic for through 32 weeks of this season to a Nielsen 2 average live program rating plus seven days of time-shifting. A year ago, Fox was at a 2.5 rating at the same time.

In addition, Fox — as well as other networks — is facing a challenging upfront market, where it is estimated national TV sellers might see an overall 5% to 10% decline in dollar volume.

“The upfront market in some ways is always tough,” said Toby Byrne, president of advertising sales for Fox Networks Group, in a press call with TV reporters. “[But] we are certainly judge on our sales 12 months out of the year — not just the upfront.”

“Dollars have moved to digital — the large bulk of dollars have done to Google and Facebook,” he says. “[But] our digital offerings are compelling as well, and our ad serving measurement has caught on. We’ll have an opportunity to take advantage of that audience.”

Looking at its schedule, Fox is entirely redoing its Tuesday night — jettisoning “The Mindy Project” among other shows — replacing them with two new comedies and a drama.

“Grandfathered” stars John Stamos as a bachelor whose life has drastically changed when he discovers he’s not only a father, but a grandfather. It airs at 8 p.m. Then “The Grinder” at 8:30 follows a famous TV lawyer (Rob Lowe) who, after his hit series “The Grinder” is canceled, moves back home and joins his brother (Fred Savage) at their family’s real-life law firm.

“Scream Queens” comes on at 9 p.m, a comedy-horror hour about a women’s sorority house where a murder takes place 20 years after a mysterious death on the college campus.

On Monday, a TV version of the film “Minority Report” follows the partnership between a man haunted by the future and a cop haunted by her past, looking to stop crimes before they happen. It’ll run after “Gotham” at 9 p.m.

On Fox’s strong Wednesday — which has “Empire” at 9 p.m., the real bright spot for the network this past season, “Rosewood,” starts at 8 p.m. It's about a private pathologist who uses sophisticated technology to help a detective and the Miami police department uncover clues no one else can see.

Other shows will be air in-season or have midseason starts, including “The X-Files,” a new “event” series starting in January. It comes 13 years after the original series begins.

Plus, there is “Bordertown,” a new animated comedy looking at the cultural shifts taking place in America; “The Guide to Surviving Life,” a new young ensemble comedy; a new DC Comics-inspired like drama “Lucifer,” a story of the original fallen angel, bored and unhappy as the Lord of Hell; and “The Frankenstein Code,” a modern take on the classic Mary Shelley story about a man brought back to life by two scientists.

Little surprise, next season's “American Idol” will be ending its run after 15 years. “Idol” helped Fox dominate much of the last decade in terms of the best 18-49 viewers results for all networks. “Idol” was the strongest-performing regular broadcast series among those key viewers for eight seasons.

In addition to “The Mindy Project,” Fox won’t be bringing back drama “The Following,” comedy-drama “Backstrom,” comedy “Weird Loners,” and longtime six-season drama “Glee,” among other shows.