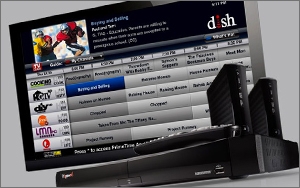 The company now has 13.8 million pay TV subscribers. A year ago in the same time period, Dish added 40,000 new subscribers.

Still, Dish witnessed a 4% gain on the average price each subscriber pays per month to $86.01. Overall company revenue was up slightly for Dish Network to $3.7 billion from the $3.6 billion of a year ago -- but a bit below expectations, according to some analysts. Net income attributable to Dish more than doubled $351 million to $176 million.

Dish executives believe the down-trading pay TV subscribers are the result of a weak economy and heavy promotions from competitors.

In an effort to counter this earlier this year, Dish launched Sling TV, a cloud-based Internet TV service offering a slimmer package of networks at a cheaper price.

Analysts are still positive about Dish overall, especially its acquisitions in recent years in spectrum holdings. One analyst says Dish is now the fifth-largest holder of spectrum in the country.