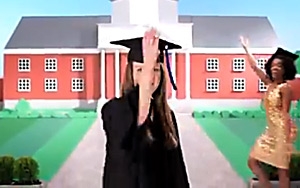 Fifth Third Bank is partnering with national reemployment company NextJob and launching a campaign that targets new college graduates who are without jobs.

Created by Leo Burnett Chicago, “Brand of You” will give away $1 million in career coaching.

Recent graduates, many of whom fall into the millennial generation, are invited to enter for one of 1,000 job coaching scholarships during the campaign period, which ends July 20. Consumers are asked to Tweet an answer to the following statement: “Tell us why you deserve free one-on-one job search coaching” with both the #BrandOfYou and #53Enter hashtags.

One TV spot features Gina, a real-life recent college graduate and current job seeker, to encourage other recent grads to apply for job coaching scholarships and demonstrate that anyone can gain the knowledge necessary to create and promote their own personal brand and find meaningful employment.

“With the data and capabilities we have today, we can target sites that we know have a preponderance of the millennial target audience, Veltre tells Marketing Daily. “We want to make sure that millennials hear this message because we want them to engage, we want to see themselves in the Gina video, we want them to build their personal brand -- and most importantly -- we want them to apply for the job coaching scholarships.”

In a second spot, Commencement, the speaker humorously cuts to the chase, telling graduates (half of whom don’t have jobs) what their life is going to be like.

Another target of the campaign are parents of recent graduates who might be under-employed or not taking full advantage of their degree.

“We want parents to encourage their children to seek the job-coaching scholarships and information on resumes and other tools,” Veltre says. “That is one of the reasons we have purposely targeted a broader age group than millennials.”

During TwitterResume events, job seekers will get to advertise their personal brands in a single Tweet. TwitterResume events will be held on June 2 and July 8. NextJob coaches will be providing feedback to Tweets from participants during the live events, and on all four event dates, Fifth Third will award 50 job coaching scholarships for the best responses.

In addition, Fifth Third and NextJob are opening up full access to the Job Seeker’s Toolkit to anyone interested during the campaign period.

“We are excited about this campaign because it shines a light on an issue that impacts so many people in, hopefully, a breakthrough, creative way,”  Veltre says. “And most importantly it provides help and assistance for recent grads who need assistance in building their personal brand and focusing their job search efforts. $1 million in job coaching scholarships can make a difference.”