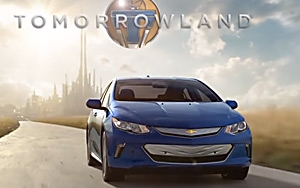 Few things resonate as strongly and deeply in American consumer culture as the idea of "The Car of Tomorrow." Even NASCAR used that name for its next-generation race chassis. GM has some ownership of the idea. Its vehicles and marketing were part of early-60s, hyper-speed optimism evinced by its 1964 World's Fair exhibit “Futurama”; and before that, with its futuristic Motorama tours, and the designs coming out of Harley Earl's studio.

General Motors' Chevrolet division is bringing the idea around again by partnering with a movie about a scintillating future -- one that borrows visual ideas from a Futurama past. The automaker is touting its next-generation Volt via a partnership with the upcoming Disney future feature, "Tomorrowland."

The campaign, “Tomorrow, Today,” features a new TV spot using the film’s score and setting. The ad is set in a vast, futuristic design studio in the Oz-like city of the film. We see the interior of the studio, where cartoon animations based on scans of concepts from the GM Heritage Center in Sterling Heights, Mich., morph into each other. The final vehicle -- the Volt -- heads out of the studio, down the road, and away from Tomorrowland. Before the culminating shot of the Volt, we see conjurations of vehicles like the Firebird III, which debuted at the 1959 Motorama; the Astro II, and Astro III prototypes.

Chevrolet says that in addition to the broadcast spot, there is digital work tied to the film. The next-gen Chevrolet Volt and EN-V concepts will be on the blue carpet at the premiere in The Downtown Disney District in Anaheim, Calif. on May 9.

Paul Edwards, Chevrolet's VP of marketing, says the effort allows GM to tie the company's past to its present, even if only intrinsically. “The Chevrolet archives are full of innovation in the form of sketches, specs and renderings for 'the car of tomorrow'," he said in a statement. “This animation reveals how the freedom of imagination helps find new roads in the present day as demonstrated in the next-generation Chevrolet Volt — the car of tomorrow, today.”