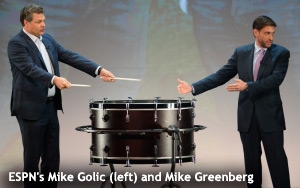 One of ESPN’s biggest announcements at its upfront presentation Tuesday in New York was about radio, not television.

It was the news that ESPN Radio’s “Mike & Mike” show (6-10 a.m. Eastern) -- hosted by Mike Golic and Mike Greenberg and originating for nearly 16 years from ESPN headquarters in Bristol, Conn. -- will relocate in February to studios in New York City, in the same building as ABC’s “Good Morning America” studio in Times Square.

ESPN literally beat the drum for the move as Mike and Mike took the stage at the Minskoff Theater -- also in Times Square -- to announce the move and welcome the stars of “GMA” to join them on-stage: Robin Roberts, George Stephanopoulos, Lara Spencer and Amy Robach.

The planned proximity of “Mike & Mike” to “GMA” will allow synergies between the two, in the booking of guests and producing of segments, and also in the advertising arena, “giving ESPN and ABC sales teams the opportunity to sell packages across networks,” ESPN said.

ESPN made two other significant programming announcements -- both concerning TV. The network announced that it is expanding its signature “SportsCenter” franchise with two additional hours airing live every morning -- from 7 a.m. to 9 a.m. Titled “SportsCenter AM,” the new morning show will also “work closely” with “GMA” to identify where the two shows can share talent and resources, said ESPN SVP Rob King.

At its upfront, ESPN emphasized its dominance in TV sports. “Other companies might try and sell you the ESPN audience … but it’s not the ESPN experience,” said Eric Johnson, ESPN’s EVP of global multimedia sales.

The network brought Hannah Storm on-stage to point out that ESPN has the rights to this year’s U.S. Open tennis event for the first time.

For its upfront, ESPN adopted the theme, “The ESPN Impression,” which was intended to encompass ESPN’s networks on television and radio and also its online presence. “Our goal today is to demonstrate the value of an ESPN impression,” said Ed Ehrhardt, president of global customer marketing and sales. “There is no audience more passionate than sports fans,” he said. “And ESPN is their home.”

Attendees at the ESPN event heard testimonials about the effectiveness of advertising on ESPN platforms from representatives of three ESPN clients: Allstate, Dr Pepper and Fidelity Investments.