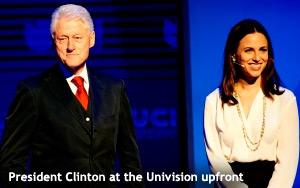 Univision recruited a high-profile public personality to speak at its upfront on the subject of marketing to Hispanics: former President Bill Clinton.

The President was the opening act, so to speak, at the Univision presentation held inside Times Square’s Lyric Theatre Tuesday morning in New York.

“If I were an advertiser, I would study the changes in demographics [in the U.S. Hispanic population] very carefully,” Clinton said, as he sat for an onstage interview at the outset of the upfront with Alicia Menendez, a commentator and anchor on the Univision-owned Fusion network.

“It’s very important to recognize that the Hispanic population of America is increasingly diverse,” the former president said, referring to the immigrants from many different Latin-American countries who have formed vibrant, growing communities in the U.S.

The interview drove home the message that there is more to Hispanic TV audiences than simply having Spanish as a common language. Not only do Hispanic TV viewers come from a variety of different countries, but their communities are so well-established in the U.S. they can be found at all levels of society.

Moreover, many younger Hispanic-Americans are English-speaking -- bilingual millennials who Univision has dubbed “billennials.” They’re just one of the target groups in the vast Hispanic-American population that Univision wants to help marketers reach on its many platforms, which on TV include Univision, UniMas, Univision Deportes (sports) Network, Fusion and El Rey.

“Across UCI [Univision Communications Inc.], we reach 49 million consumers monthly out of a total of 57 million Hispanics,” said Steve Mandala, EVP of advertising sales. “That is unmatched scale. No other media company can make a claim like that against their target audience,” Mandala said.

Mandala also hammered home a point about Hispanic viewing habits that he said makes Univision’s networks unique in today’s fragmented television marketplace, since so much TV viewing is done via time-shifting capabilities such as on-line streaming and video-on-demand. He pointed out that 91%  of viewing on Univision is “live” viewing -- i.e., viewing that’s done when a show first airs. The figure is 93% on UniMas, he said. “Fragmentation is about other networks -- not UCI’s networks,” he said.

Univision announced a number of new programs at its upfront, including a music-talent competition produced by Simon Cowell and featuring Ricky Martin as an executive producer and one of the talent judges. Univision feels so strongly about this series, titled “La Banda,” that it announced a second season for the show at its upfront, although the first season won’t even begin to air until next September.

The company announced a number of new prime-time soaps (“novelas”) for both Univision and UniMas. It also announced a new Saturday night variety show -- “Sabadazo” -- that will replace the long-running “Sabado Gigante,” which is ending its run after 53 years. Longtime host Don Francisco was on-hand at the upfront to be thanked and saluted on-stage.

Perhaps the boldest declaration at this upfront was one made by Juan Carlos Rodriguez, president of Univision Sports. He announced a package of soccer games that will comprise a kind of World Cup of the Western Hemisphere -- national teams from 16 South and North American countries vying for the “Copa America Centenario,” a total of 32 games all airing in prime time and all being played in the U.S.

“Univision’s ratings [for Copa America] will exceed even those of the World Cup!” Rodriguez predicted.