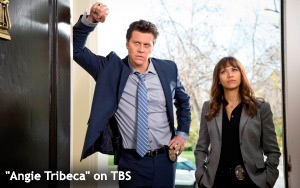 TNT and TBS are both set to undergo dramatic makeovers in programming and presentation under new Turner entertainment chief Kevin Reilly, who outlined the changes at the Turner upfront Wednesday in New York.

Reilly, who joined Turner five months ago after serving as head of programming at Fox Broadcasting, harkened back to an earlier period in his career. He was president of FX in the years when FX first made a name for itself with some of the most daring programming on cable TV.

At the upfront on Wednesday, Reilly faced the New York advertising community for the first time in his new role as president of TNT/TBS and CCO for Turner Entertainment. He indicated that upcoming programs on both TNT and TBS would take more chances and be more daring than what advertisers and audiences expect — even if it means alienating the networks’ traditional viewership. It was a strategy he adopted at FX with great success.

“We’re doing a proactive makeover of these two networks,” Reilly said. “We’re going to double the number of original series on TNT and TBS over the next three years. We’ll sharpen the point of view to be even more adventurous in our programming.

“We’ll also change the way that we market our networks — blurring the lines between entertainment and advertising, which will present some very interesting opportunities for you,” he told the audience of ad agency representatives and media executives.

“As we expand our portfolio, you should expect some very daring shows, some of which will not appeal to all of our current viewers, but will be a lightning rod to attract new viewers,” he said. “By this time next year … our presentation and portfolio will look dramatically different.”

Reilly announced three new dramas in development for TNT: “The Alienist,” a cop show set in the 1890s and adopted from the novel by Caleb Carr; “Will,” a series about the young William Shakespeare and his life in London; and “Animal Kingdom,” a crime drama set in a Southern California surfing community.

For TBS, Reilly announced two new comedies: “Wrecked,” about the aftermath of a plane crash and the supposedly comedic adventures of the wreck’s survivors on a deserted island; and “The Group,” a comedy produced by Conan O’Brien about alien abductees. A third sitcom, the previously announced “Angie Tribeca,” will premiere later this year.

Reilly also announced a new late-night show to take up the time slot following “Conan.” The show doesn’t have a title or a premiere date yet, but it has a host -- comedian Samantha Bee, formerly of “The Daily Show,” who will become the only female late-night host currently on TV.

But the TNT/TBS announcements were only part of the Turner upfront presentation, in which all of the Turner network properties were included in the same event for the first time: TNT, TBS, CNN, HLN, TruTV, Turner Sports, Adult Swim, Cartoon Network and Boomerang.

“Today is a historic day,” declared Donna Speciale, president of ad sales for Turner Broadcasting. “For the first time, all of Turner is together on one stage — one Turner team, one unified portfolio representing nearly 15,000 hours of original, premium content on every possible screen on every possible platform,” she said.

As has become commonplace during these television upfronts, Speciale took aim at the digital “players” seeking to siphon ad dollars away from TV. “Turner truly is a multiscreen media powerhouse,” Speciale said. “You won’t get anything like this from the digital players — not without bot traffic, viewability issues and Wild West metrics. Yeah, I just said that. We’re not into smoke and mirrors here, we’re into results — above board and fully transparent,” she said, indicating that Turner believes that’s not the case in the online world.