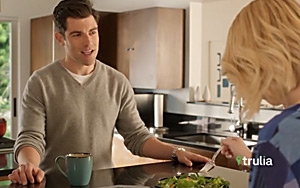 Some 40 million people move each year and for many, it is an arduous process. To coincide with the home buying season, online real estate platform Trulia teamed with HelloWorld to introduce a multi-faceted campaign featuring The New Girl's Max Greenfield.

The Max At Home video series featured Greenfield and comedian Leslie Grossman in four long-form 1:30 videos and 10 30-second clips to humorously illustrate the home-buying process. For example, one video showed the two actors trying to figure out what flexible payment arm really means.

Greenfield was selected as the campaign's prominent spokesperson, due to his popular character Schmidt on the Fox sitcom, which chronicles the lives of millennial roommates. He is someone who knows the importance of living in the right place with the right people, say agency executives.

Next, the effort included an interactive home personality quiz—the Buyers-Diggs test—to help users assess their at-home habits and prepare for living together. Greenfield lent his services to help Trulia users find their ideal home with a specially-created quiz.

Prospective buyers were invited to collect several images of their favorite homes in a Pinterest-like format via Web or mobile platforms in order to win $25,000 and a One Kings Lane gift card. This sweepstakes was developed knowing that 70% of prospective buyers are shopping with someone else. Hence users needed to be able to invite others to collaborate on their boards adding and sharing homes for the easiest way to home search together.

In addition to making sure this campaign was shareable, HelloWorld focused on mobile accessibility. Trulia attracts some 48 million visitors each month, with 23.7 million using mobile devices, an increase of 67% over 2013.

At a month and a half in, the campaign delivered 4.5 times the number of forecasted unique users, while the quiz saw a 90% completion rate.

This is the first campaign for the online real estate platform since it merged with Zillow in February. Last year, Trulia spent $33.8 million on its first national marketing campaign, up significantly from $7.7 million and $2.6 million during 2013, and 2012, respectively.

HelloWorld and Trulia began working together in May 2014.