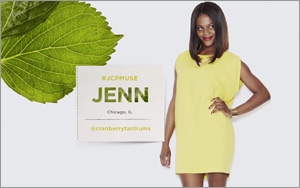 While JC Penney still has a few billion bucks to go before regaining its former status, the retailer posted encouraging results for its first quarter, propelled by gains in women’s and men’s clothing. It reported net sales of $2.86 billion, up from $2.8 billion in the same quarter a year ago, with same-store sales rising 3.4%. And its net loss of $167 million for the period represents a 52% improvement.

It says its Sephora inside JCPenney units also performed well, as did the home category -- an especially vulnerable area in its efforts to rebuild. "We are pleased with the company's solid performance this quarter across all key metrics,” says Myron E. (Mike) Ullman, III, its CEO, in its release.

“This year we are switching gears, going on the offensive to gain back share and grow our business profitably while executing our vision to become the preferred shopping choice for Middle America.”

Based on strong Easter and Mother’s Day results, the Plano, Tex.-based retailer also upped its full-year forecast and is now calling for same-store sales gains of between 4 and 5%.

Industry observers liked what they saw. “We applaud management for continuing to produce meaningful gains as a part of the turnaround effort,” writes Deutsche Bank, in its analysis of the numbers, and says that the increased forecasts “likely sets JCP favorably apart from its mall-based peer group this reporting season.”

While the Menomonee Falls, Wisc.-based chain says it was please with its “more balanced promotional calendar,” others are less than impressed. Sterne Agee CRT downgraded the company to neutral.

The overall retail climate is both choppy and challenged, pressuring the likes of Kohl’s, JC Penney and Macy’s, writes analyst Charles Grom. And while he says he continues to be a fan of the “Greatness Agenda” Kohl’s had previously laid out as part of its strategy, “it is becoming increasingly unclear how quickly sustainable sales benefits can materialize.”