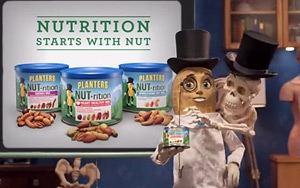 Eleven-year-old Planters NUT-rition is getting updated packaging and its first brand-specific national campaign since 2012.

The NUT-rition line includes 12 different mixes of nuts, fruit and other ingredients, each blended to support a different nutritional or wellness benefit, such as heart health, energy, or digestion.

In addition, Planters' Mr. Peanut brand character, traditionally shown in a cross-legged stance, is portrayed in more active walking mode on the redesigned packages to heighten his resonance with the active, health-minded people who are NUT-rition's core consumers.

The new campaign, from TBWA New York, is themed "Nutrition Starts With Nut," and includes two television ads (each with 30- and 15-second versions). Both feature Mr. Peanut shown in a science lab setting, wearing a lab coat, and conveying in a jaunty, humorous way that Planters has done all of the hard scientific work to ensure that consumers can realize important nutritional benefits simply by consuming tasty NUT-rition snack mixes.

In one spot, the character stresses the heart-health benefits of NUT-rition as he playfully fends off a skeleton trying to get at the snack mix. That ad was posted on YouTube today, and will begin airing on TV nationally on May 18. The second spot, "Science," will receive highly targeted exposure: It's scheduled to start airing on addressable TV on June 8.

The campaign also includes digital ads and video on third-party sites and major social channels, including custom ads with partners, as well as messaging on Planters' Mr. Peanut-branded Twitter, Facebook and other social media channels.

NUT-trition ran its last major national campaign three years ago, when it partnered with Rodale to launch the Men's Health Recommended Mix — now among the snack line's top-sellers, according to Cotter. That campaign included a TV spot featuring Mr. Peanut and two other manly nut characters, an ad in Men's Health and other print vehicles, and digital and social elements (including integration in the magazine brand's mobile apps).

Fall 2012 also saw the launch of a NUT-trition Peanut Butter line, the first national PB brand to incorporate ingredients such as granola, nut pieces and fruit. That was backed by marketing that was managed separately from the snack-nut side of the business, and included an experiential, online and social promotion in partnership with Zipcar, focused in major U.S. markets where Zipcar operates.

Since August 2013, Planters has been running a "Power of the Peanut" campaign — also from TBWA and also starring Mr. Peanut — designed to raise consumers' awareness of peanuts' high protein and nutrients content, and so support the full, varied range of products within Planters' portfolio.

That umbrella campaign — a response to the reality that peanuts, although nutritionally on par with other nuts, haven't benefitted as much from nuts' growing popularity among protein-craving, health-conscious consumers — helped lay the foundation for Planters' 2014 launch of four bold-flavored peanut varieties (chipotle, salted caramel, cocoa, smoked). The strategy also specifically called for "Power of the Peanut" to set the stage for the refresh of the NUT-trition brand and its accompanying campaign, according to Cotter.

The umbrella campaign's messaging is paying off: Sales  for Kraft Foods' overall Planters portfolio have been showing incremental year-over-year sales growth since late 2013, he reports.

While NUT-rition's sales have "flattened out a bit" since its brand-specific marketing has been in a quiet period, it has been one of Planters' fastest-growing lines since its launch, and it continues to have particularly promising growth potential, Cotter says. Plans call for supporting the brand "in a big way" starting with the current campaign, he confirms.

Nuts and trail mixes have been the fastest-growing segment within the booming snacks arena, showing 53% growth between 2008 and 2013 and projected to grow at a 60% pace over the next four years, according to Mintel.

However, private-label nuts and trail mixes have been stealing some of the growth thunder. That, says Cotter, is among the reasons that Planters is focused on innovation that adds differentiation to the brand's already unmatched recognition and quality perception among consumers.