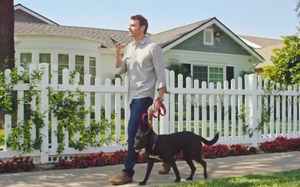 Merial, the maker of Heartgard Plus (ivermectin/pyrantel), is trying to raise awareness of canine heartworm disease and prevention via a social media effort.

The company is asking dog lovers to tell the world why their best canine friend is dear to their heart. For every social action taken by consumers, Merial will sponsor $1 — up to $150,000 — to Canine Companions for Independence, a non-profit organization that provides highly trained assistance dogs to people with disabilities.

Actor Scott Foley, who plays Jake on the hit TV show “Scandal,” shares his love letter to his dog, Frankie, in a video that is part of the campaign.

From now until Aug. 15, dog owners can take a social action such as watching the "I HEART My Dog" video featuring Foley's love letter tribute to his dog on www.iheartgardmydog.com, sharing the video on their social media channels, or submitting a #iheartmydog love letter to their dog to Instagram, Twitter or Facebook.

"As we approach the peak of heartworm season this spring and summer, Merial, is working to better educate dog owners about the importance of year-round heartworm disease prevention," says Brandt Giffin, executive director of U.S. pets marketing for Merial, in a release.