Will Arnett Stars In Bridgestone Campaign For DriveGuard Tires 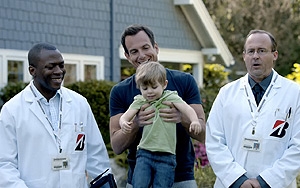 Television star Will Arnett (“Arrested Development” and “30 Rock”) is driving a new slate of ads for Nashville-based tire maker Bridgestone and its DriveGuard run-flat tires. The campaign, “Everyday Performers,” launched last year with Julie Bowen of “Modern Family.” Arnett replaces Bowen as the comic star of the ads in which he is saved from prosaic situations, with the DriveGuards on his car being the deus ex machina.

In the new ads, Arnett is a dad. But he’s a dad surrounded by engineers in white coats. They are Bridgestone engineers who have shot his car with DriveGuards and will now ride with him as he goes to get diapers for his son, who rides along. As he drives, the engineers torture his tires, which keep on going. DriveGuard tires let drivers travel up to 50 miles at up to 50 miles per hour after a flat-inducing puncture, per the company.

The ads break on prime-time network programming during the May 14 season finale of “The Blacklist” on NBC. There is also a 15-second spot, and on Bridgestone’s YouTube channel, out-takes and other ads featuring actor/comedian Ken Jeong. And there is a social media engagement element with Arnett. Dallas-based Publicis Hawkeye created the work.

J.D. Power and Associates, in this year's “Original Equipment Tire Customer Satisfaction Study,” released in March, found that customers with run-flat tires are less satisfied overall and replace tires more frequently in the first two years of ownership than do those with non-run-flat tires. But, while consumers have historically avoided run-flat tires, which entered the U.S. in 1992 -- partly because, even though they offer potential fuel savings since one doesn't need to haul a spare, they wear out more quickly than regular tires, the DriveGuard tires are something new. Called "third-generation" they don't come with the penalty of a huge price tag, actually run flat, and come with a normal warranty. They also seem to be well received by the buff books.

The firm's study finds that tire brand image influences customer satisfaction: manufacturers that convey an image of product value and environmental responsibility positively influence overall customer satisfaction, and 51% of customers who intend to purchase new tires cite brand reputation as a criterion for purchase, the highest among all purchase criteria.