What's Up With New Mother CEO Michael Wall And That Duck? 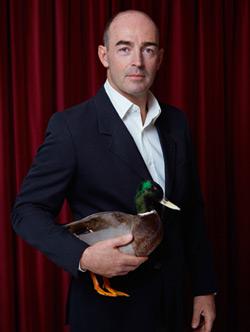 Way back in 1929, the Marx Brothers did a comedy skit called The Cocoanuts in which Groucho, while looking at a map, makes note to Chico of a viaduct. Chico, playing a character with poor English skills, says, "Why a duck?" And thus, a very Who's On First-style skit was born.

Fast forward to 2015 and we have former Fallon London founding partner Michael Wall holding a duck in a portrait accompanying a press release about his joining Mother as equity partner and gobal CEO. The connection if any, is not immediately clear but, after all, this is advertising and we all know advertising types are a funny bunch and love making witty references.

If not the Marx Brothers then maybe it's a reference to the "walk like a duck, talk like a duck" thing illustrating Wall's natural tendency to succeed at whatever endeavor he chooses to take on. Or maybe he just really likes Duck Dynasty. Or, perhaps, he's just smitten with his new position as Mother Duck.

In any case, Wall will join the agency's existing equity partners Matt Clark, Andy Medd, Robert Saville and Mark Waites. Wall will be based in London but will oversee operations across the agency's offices in London, New York and Buenos Aires.

Wall began his career as a graduate trainee at DMB&B; working on COI, P&G and Budweiser. In 1992 he joined Lowe Howard-Spink for the first time on Tesco and Coca-Cola. His first taste of the creative start-up was in 1995 when he became a Board Account Director at Simons Palmer (which became TBWA) on the Sony PlayStation launch.

And speaking of the aforementioned natural ability to succeed, Wall -- as mentioned above -- was one of the five founders of Fallon in London. During the years between establishing the agency in 1998 and when he left, Fallon became a well-respected creative agency producing work for Sony Bravia, Skoda and Cadbury and others.

Of Wall joining Fallon, partner Saville said: “We have been chasing Mr Wall for years. He’s not an easy man to catch. He wasn’t an easy man to beat either as Mother and Fallon faced up against each other over the years. Mother has needed Michael’s skills in business leadership for a while. But more importantly we welcome a genuinely good person with the same passion for the transformative power of creativity into the family.  I suspect Michael will make us all better.”

Wall is also pleased with the move and said, “Mother is a special company. I'm delighted to take on this role. Our shared ambition is to make sure Mother continues to lead the creative frontline and we accelerate our growth and impact in the markets we are already in as well as those that we are eyeing up. And have some fun along the way.”

How will the Mother brood take to their new Boss Duck? Will they follow him like ducklings follow their mother? Will they quack on command? Please, Mother, we'd love to see a picture of you all following Michael around the office like loving children