New Trulia Deal Is A Scream! 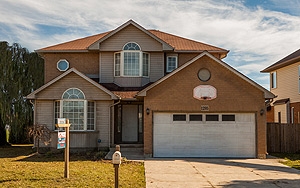 “Buyer Beware!” has never been a truer warning than in Trulia’s listing for 1295 Brimstone Ave. in Willow Point, Ill. Those not careful could end up buying a haunted house (or, really, no house at all).

In a partnership with Fox Pictures, Internet real-estate company Trulia is listing the possessed house from the upcoming film reboot, “Poltergeist,” as a property for sale. The house is allegedly available for $270,666. But those lingering on the listing (and reading closely) may realize something is a bit off.

“We like to have a little fun as we show properties,” Peter Verprauskus, director of business development for Trulia, tells Marketing Daily. “[The listing] will also help us get a little exposure to people who may not have heard of us or don’t differentiate us.”

The promotion is designed to look like one of Trulia’s typical listings (including even a working mortgage calculator and recommended other available houses). The listing begins innocently enough, mentioning a “spacious living room,” “spectacular bay windows” and “inviting French doors” that lead to an office or den. A bit further down, however, the description becomes more ominous, describing windows that let in “plenty of sunshine … to brighten the darkness,” and a walk-in closet that’s “almost like stepping into another world.” Photos of the property are “cinemagraphs” that are brought to life with moving animation like the film (a television tuned to static, or flickering lights.) The crime map gives away the stunt, with recent occurrences including a “demonic possession,” “residual haunting,” and a “tree assault.” The listing ends with an allusion to the original film’s iconic, “they’re here” line: “For the family wanting the perfect starter home, IT’S HERE!”

“We wanted to create something that looked as similar and consistent to Trulia’s listings as possible,” Verprauskus says. “But with enough Easter eggs that it’s not realistic at all.”

Finding the home won’t be easy, however (and not just because it doesn’t exist). The home doesn’t come up in general searches (even if the exact address is typed into Trulia’s search feature). The company instead is relying on word-of-mouth and press outreach to get word out about the property.

The listing is the first promotion Trulia has done with a movie studio, largely because the house is almost its own character in the film, Verprauskus says. The company would be open to others, in the right situation.

“We’d be drawn to any film that has a home element or a moving element to it,” he says, while also noting that the rebooted film will also attract the interest of buyers who may have seen the 1982 original film upon which the upcoming film is based.