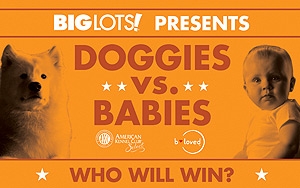 Nothing seems to activate social sharing and comments like funny and cute -- which is why discount retailer Big Lots is featuring puppies and babies in its new ad campaign.

“Originally, we were planning on two separate campaigns to support our new lines of exclusive products for dogs and babies, but when we brought the challenge to OKRP, they instantly thought that there was potential for stronger customer engagement in pairing dogs and babies together,” says Andrew Stein, chief customer officer for Big Lots. “Everyone’s a winner with this campaign.”

The campaign includes six original short videos and an introductory ‘trailer.’ In the videos the dogs and babies take on fun challenges such as chess, played on a giant chessboard and geography via a rolling globe.

Each spot ends with the hashtag #TeamDoggies or #TeamBabies to encourage viewers to share on social media on who won this so-called cuteness battle.

“We have less than three seconds to get customers’ attention on social platforms, and thought we’d play to the most popular Internet content,” says Tom O’Keefe, CEO, OKRP.

One notable challenge with this campaign was ensuring that the babies weren't scared of the animals. Solution: the agency cast babies with their own family dogs. Then some puppies were added into the mix to provide additional levels of "energy and spontaneity."

Big Lots annually spends around $13-$14 million on advertising each year, according to the company's financial statements. While its overall budget remains consistent, the retailer plans to shift more money to digital and away from print this year.

This new campaign continues to build on Big Lots’ expansion into social media. Big Lots had virtually no social media presence 18 months ago, and by the end of 2014, the discount retailer reached its goal of 1 million Facebook fans.

The retailer receives 2 million to 3 million visitors to its Web site every week. Its first Pinterest sweepstakes during Christmas drove over 3.2 million impressions.