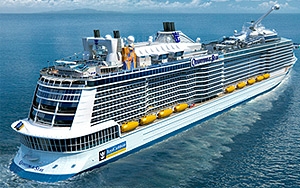 Mullen Lowe, part of Interpublic Group, has been selected for lead creative duties for cruise ship company Royal Caribbean after a review, the company confirmed Thursday. The award is subject to the completion of contract negotiations which are ongoing. WPP’s JWT was the incumbent.

Royal Caribbean spent about $75 million on ads last year according to Kantar.

The win comes just a week after IPG merged its Mullen and Lowe units, elevating Mullen head Alex Leikikh to CEO of the merged entity. The Royal Caribbean pitch was handled by Mullen.

Commenting on the selection of Mullen Lowe, Michael Bayley, President and CEO Royal Caribbean International, said the company was impressed by the agency’s “strategic and creative thinking, which matches the energy and innovative imagination of our brand.”

Meanwhile, the client is proceeding with a separate review of its media agency assignment. Mullen Lowe media unit Mediahub is pitching that business as well. The incumbent is WPP’s Mindshare.