Text+Motion: Video For The Distracted Age

Mobility may have as deep and lasting an impact on the aesthetics of video production as television itself had in the 1940s. Any time fundamental technology changes the formats of media and the circumstances of their consumption, creators need to innovate. We are seeing some of this already in the ways in which mobile video formats are being reimagined by unique app experiences.

I am not talking about merely porting YouTube video clips and Webisodics onto the handheld screen. I am interested in the ways in which mobility is using video in much the same way older media used images and text. For instance, Funny or Die recently released a hilarious  “News Flash” app that does half a dozen goofs on the day’s headlines. A straight news piece – “Jeb Bush reversed a previous statement and said he would not have gone to war in Iraq” is followed by a punchline: “So, even Jeb’s statement had more of an exit strategy than George W. Bush did.” But the headlines live under a full screen short video loop of relevant stock or news footage. There is no particular need for the video here, other than the apparent imperative to use video in all forms of media now.

Call it a need for motion. You can see it in the recent inclusion of media properties in Snapchat. The Discover section has a dozen major media providers like CNN, Yahoo, ESPN, Cosmopolitan and others deliver a daily dose of up to ten pieces of content. Tap into any of these providers and you swipe through a series of what are called “topsnaps” – essentially splash pages for the story that you can swipe down to read. The idea is to have some element of the news section feel native to an app that specializes in short, disposable video messages. But the art of each topsnap comes in how words and moving images are married to tease the story. 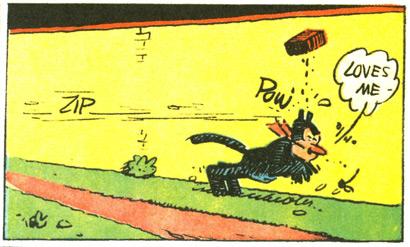 At their worst, these short video loops are perfunctory, usually employing a Ken Burns image zoom or pan effect or a pop-up overlay. ESPN runs action clips from the sports story at hand that usually leads you just up to the moment of truth. At their best, however, these topsnaps are reaching towards some of the text and motion aesthetics we see evolving in Vine and Instagram videos. Words and motion marry to create the kind of splash page impact we once enjoyed from great magazines. Cosmo today features a piece in Snapchat on “Habits You Absolutely Must Start In Your 20s” where the headline is foreground to a screen filling video loop of a luscious food object scraping down red lips, in macro and slo-mo. It is a gorgeous marriage of text and motion one could watch for a while before reading the less inspired listicle of a text piece.

The evolving art of the supershort video and overlay text is central to Snapchat itself, of course. Try subscribing to MTV’s regular updates or NoThisNews. In each case their video teams are learning how to use  brief headlines on background video to tell a richer story more efficiently than either could do on its own.

This new video aesthetic is one response to mobility and the unpredictable modes of reception. Traditionally, video has been the most lean-back of all media. It was presumed by filmmakers and TV producers, even Web video artists, that they were addressing an audience in some level of repose. The viewer was there for some sort of story arc that requires motion, usually voice and music to create the immersiveness we came to expect from the medium. But the most important aspect of the mobile shift is that devices fully untether media experiences from predictable circumstances. Once the video maker realizes that people may be viewing this in a public space and during a few minutes of boredom, she must adjust accordingly.

As Facebook video’s default audio-off mode demonstrates, polite mobile video has to behave like a silent movie with an opt-in for a soundtrack. In fact the connection to silent film runs deeper than that. In many ways mobile video throws us back to the earliest years of the 20th Century, when film did not tell full stories so much as capture glimpses of expression, pieces of action. They often lasted under a minute. Even though more narrative film emerged by 1905, these first film clips of the era innovated within time and sound constraints that are similar to today’s mobile forms. They explored the art of the gesture, slivers of life, the smallest part of a story the viewer was left to embellish and fill out.

Most text+motion video does little more than replace audio narration with headline. But there is the possibility here for real creative innovation. The interplay of text and motion is open to possibilities once you start thinking of them in tension not just complementary. Once again, go back in media history for helpful precedent. At about the time silent film was first appearing on the world scene, the newspaper comics were learning to speak, in the form of speech/thought balloons and panel captioning. Even the earliest practitioners like Frederick Opper’s Happy Hooligan and Winsor McCay’s Little Nemo, and especially the later master George Herriman used text that was at odds with image.

While early film soon discovered narrative arcs and longer formats, and comic strips sprouted comic books, it is quite possible that the text-motion aesthetic of some mobile video is with us for the long haul. It embodies fragmented attention and multitasking. We are already seeing some of it migrate to TV and online news. Check out some of the news videos on CNN.com. They often tell a story adequately with sound on or off. Even TV creators are starting to think about how their content play on portables. Moreover, mobility is impacting video creative even outside of devices because these handhelds are teaching us what it means to communicate in a world of multi-screen distraction.