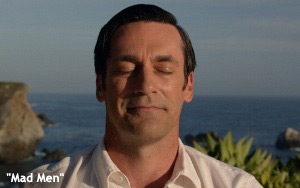 If you have not yet watched Sunday night’s “Mad Men” finale, please be forewarned that this blog contains details -- otherwise known as “spoilers” -- about the fates of the show’s principal characters. Also, don’t go on the Internet, check your Twitter feeds or look at your Facebook page, because everyone there will be talking about the show too. For that matter, don’t open any texts or answer your phone. In fact, if you really want to avoid encountering “Mad Men” spoilers today, I suggest you drop what you’re doing and watch the episode right now. Otherwise, good luck avoiding comments and discussions about the show. Having said all that, here’s my recap:

Most notably, Don Draper actually smiled -- an expression not completely unprecedented for him during the seven-season run of this series. Nevertheless, this particular smile, which came at the very end of the show’s final episode on AMC, seemed to indicate that Don had achieved a degree of inner peace, at least for now.

There were happy endings for other principal characters as well.

Joan was last seen in the throes of building a production company -- for making corporate films and commercials -- in her tiny New York apartment, where a calendar indicated it was November 1970. Her ambitions drove away her developer boyfriend from California, but her sadness over the breakup was apparently short-lived. Although she’d asked Peggy Olson to join her as a partner in the production venture, which Joan proposed to name Harris-Olson, Peggy declined. In the end, Joan named her company Holloway-Harris -- her maiden name and her married name, respectively -- since, as she said earlier, a company with two names sounds better.

Roger Sterling and Marie Calvet made love in a Chicago hotel room, then quarreled, and then enjoyed each other’s company at a French restaurant. Their final scene together made it seem possible that Roger had finally found happiness -- meeting his match with a woman of experience whose messy family life was not unlike his own. Marie’s daughter, Megan, was nowhere to be seen.

Peggy and Pete Campbell said their good-byes in Peggy’s office, and Pete was last seen boarding a Learjet with wife Trudy and daughter Tammy to Wichita, where Pete would take up a high-paying job with Lear. So much for the vow he once made earlier in the series that he planned to die in Manhattan.

Harry Crane was last seen complaining that he was hungry.

In what may have been the episode’s biggest surprise, Peggy and copywriter Stan Rizzo -- long-time co-workers and sparring partners -- realized they loved each other. As their storyline came to a close, it seemed that they both would stay at McCann-Erickson building their lives and careers together.

The finale wasn’t good for everyone, although we had already learned the bad news about Betty Francis a week earlier. She didn’t die in the finale, but it was clear that her diagnosis of terminal lung cancer would do her in shortly. She was last seen in her suburban kitchen, smoking a cigarette and staring into space as daughter Sally, who was already seen a week earlier starting to take on a motherly role in the lives of her two younger brothers, worked in the background.

Sally and her brothers also faced uncertain futures, with Betty telling Don her dying wish was to have their children adopted by her brother and his wife. Sally was in favor of Betty’s husband, Henry, raising them. Don’s future role in the lives of his children was uncertain too. At best, he seemed positioned to continue his status as a distant dad.

However, Don’s apparent contentment at the finale’s conclusion, as he chanted “om” while seated cross-legged on the grass atop a California cliff overlooking the Pacific, was an indication that the future might be full of possibilities for him.

He’d come to this place following his long, meandering journey across the country. And just a short time before this series-ending meditation session, he seemed on the verge of suicide as he said good-bye to Peggy via a long-distance phone call to New York (the episode was titled “Person to Person”).

“Don, what did you ever do that was so bad?” asked Peggy, who was worried about his state of mind.

“I broke all of my vows,” Don said. “I scandalized my child [a reference to Sally catching him in the clinch with a neighbor’s wife], I took another man’s name [and] I made nothing of it.”

After he hung up, he attended an encounter session and heard a man describe a dream in which the man saw himself as an object in a refrigerator that made people smile when they opened the door -- an image that must have appealed to Don the adman, even though he had already stated earlier he was retired from advertising.

Still, the episode ended with the 1971 Coke commercial featuring young people on a mountaintop singing “I’d Like To Buy The World A Coke,” a creation of McCann-Erickson.

What were we to think? That Don went back to the ad biz and created the era’s most famous commercial? Or would Peggy and Stan have something to do with it?

In the final scene of “Mad Men,” Don’s meditation instructor summed up the show, the era and Don Draper’s life. “The new day brings hope,” the instructor said, “lives we’ve led, the lives we’ve yet to lead, new day, new ideas, new you.”