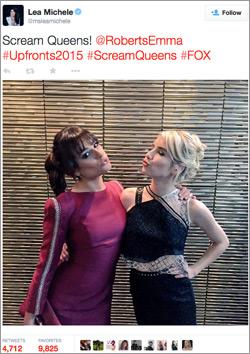 Surveying the shows unveiled during last week’s upfronts, it’s still too soon to separate the studs from the duds.

Yet according to early buzz on Twitter, Fox has a new hit on its hands with Scream Queens -- a horror-comedy series starring Ariana Grande and Lea Michele.

Last week, a collection of promotional tweets from Michele -- who previously starred in Fox’s "Glee"-- generated a ton of engagement on the social network.

By similar measures, the CW will do well with DC’s "Legends of Tomorrow" superhero fiction series; CBS is on to something with "Supergirl" -- a series that takes a distinctly feminine angle on the genre; and NBC is well-positioned with its "Heroes Reborn" miniseries.

Despite the absence of any discernible superpowers, "The Muppets" is also likely to draw big audiences for ABC, according to Twitter data. For Twitter, the buzz-based predictions are part of a broader effort to establish itself as a foreseer of TV successes and failures.

“While Twitter allows folks to follow along with moments as they happen, it can also present forward-looking decision makers with an opportunity to determine potential winners for next season,” Cait Hood, head of broadcast partnerships, explains in a new blog post.

“Promotion spend is the most significant lever used to launch a successful show, but research has shown Twitter can also be an early indicator of what shows will attract large audiences before they hit the aird,” according to Hood.

Recent research has supported Twitter’s promises of prognostication. A report from ShareThis, for example, found a strong correlation between social engagement and higher tune-in rates. In particular, users who click on shared content about a particular TV series were nearly two-and-a-half times more likely to become viewers, the social sharing service found.