Stephanopoulos Debacle Reveals Politicos And Journos Are Too Chummy 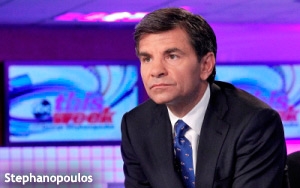 The George Stephanopoulos debacle now unfolding at ABC News is a symbol of the inappropriate chumminess that has set in between a certain class of journalists in this country and the people they are supposed to cover.

The fact that Stephanopoulos -- considered one of the top one or two stars of ABC News (the other being anchorman David Muir) -- would donate tens of thousands of dollars to a foundation run by the nation’s most powerful political couple is such a gross misjudgment that the criticism being leveled at Stephanopoulos and ABC seems wholly justified.

It does boil down to one key question: How can Stephanopoulos be in position to serve as the face of ABC’s political coverage going into a presidential election season in which his friends the Clintons are playing a huge part -- with one of them, Hillary -- seeking the presidency?

The answer would seem to be: He can’t, because so many viewers and media watchdogs will be searching his face and parsing his questions to try and detect instances where he might be favoring the Clintons and their point of view, while watching the interviews he’ll be assigned to conduct on “Good Morning America” and the Sunday morning show “This Week” with candidates of both parties.

First and foremost, the powers that be at ABC News should be intelligent enough to realize that Stephanopoulos cannot now be seen interviewing either Hillary or Bill Clinton. I mean, how are those conversations supposed to start -- with Hillary or Bill thanking their pal George for his largesse?

For all we know, Stephanopoulos gave so generously to the Clinton Foundation because he truly believes in the foundation’s charitable activities. He might also believe he can maintain his journalistic objectivity despite his ties to the Clintons. The problem is that none of that really matters here. Going forward, Stephanopoulos can strive to be the most impartial interviewer the world has ever seen, but the perception will still persist that he’s tainted and biased -- not least because critics and pundits won’t let go of it.

One of the problems here is the way in which many of those in the upper echelons of the journalism profession have cozied up to the politically powerful in this country. The two groups sometimes seem indistinguishable. Sometimes, it’s as if they’re really one group -- not two groups separated into “journalists” and “politicians,” but one amorphous group of political-media “celebrities” who appear together on TV and then head out to dinner.

The annual White House Correspondents Dinner that has become such a hot ticket for members of this class to see and be seen is a grotesque example of how the adversarial relationship that traditionally existed between reporters and politicos seems to have broken down, if not disappeared entirely.

Meanwhile, ABC has a sticky situation on its hands. It also appears to be an expensive one, with the New York Post reporting that Stephanopoulos’ current contract calls for the network to pay him $105 million over seven years. That’s a lot to pay for a guy who might now have to be marginalized in the very arena he was hired to work in -- politics and the presidential race.

So what is ABC supposed to do now? Suspend him, like NBC did with Brian Williams? And what do these suspensions accomplish anyway? Time will tell if NBC’s six-month suspension of Williams will cure him of his Pinocchio complex -- but only if NBC lets him back in the building. Will suspending Stephanopoulos for a period rid the public of the perception that he’s a pro-Clinton partisan? Probably not. So what now?